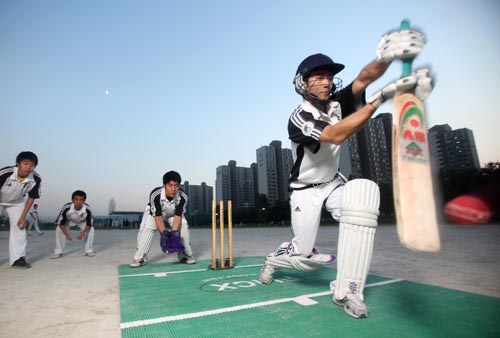 The Sungkyunkwan University Dragons cricket club participates in one of their weekly training sessions in Suwon. By Jeon Min-kyu


Stroll through Sungkyunkwan University’s Suwon Campus any weekend between April and November and you might notice something unusual.

A game of cricket is being played. Twenty-two competitors - 11 per side - compete in a game oddly similar to baseball, yet strikingly different in many ways.

A batsman prepares to make contact on a pitch from a bowler - a person throwing a rock-hard ball. Other players scattered around the oval-shaped field prepare themselves to field the ball without any gloves.

In fact, the only two people on the field with gloves are batsman and the wicket-keeper - equivalent to a catcher in baseball.

Cricket is an immensely popular sport in England and commonwealth countries. According to data from the International Cricket Council, the sport ranks third to the World Cup and the Summer Olympics in terms of global viewership, with the 2007 Cricket World Cup attracting 2.2 billion viewers in more than 200 countries.

The sport, though, is as foreign to Koreans as American football. 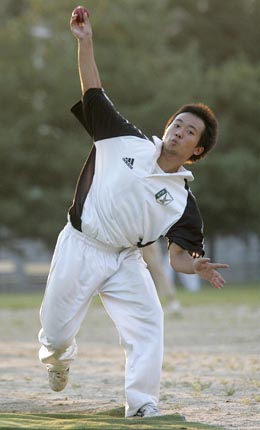 A Sungkyunkwan University Dragons bowler in action. By Jeon Min-kyu

So who in Korea would be eccentric enough to start a team in a sport with no fan base or awareness?

The Sungkyunkwan University Dragons is the first and only cricket team consisting of all-Korean members. The team is made up of 15 students who practice twice a week and participate in weekend league matches, as well as occasional international competitions.

Founded in 2001 with the help of an English instructor on campus, the Dragons got started with help from some heavyweights in the sport - Dean Jones, former Australian national team captain and Allan Border, also a former captain for Australia and current International Cricket Council member. Several other ICC members came to Korea for a coaching clinic and to help raise the profile of the sport in the country.

In June 2001, the Korea Cricket Association became an affiliated member of the ICC’s East Asia-Pacific region.

Despite being around for nine years, cricket is still a largely ignored and under-appreciated sport in Korea.

The Dragons are hard at work to change all that.

They have failed to earn a single win in domestic competition, but their love and passion for the game is unparalleled to the more skilled and experienced expat opposition from England, Australia, India and Pakistan, among others.

“A third of our team consists of players with one year or less experience in the sport - with two to three years of experience at most,” said Korea Cricket Association vice chairman Lee Hwa-yeon, 27, a senior majoring in sports science. “We’re up against players who have been playing the sport all their lives but we have a style of our own. We lack the skills but we’re young, passionate and proud to represent the first Korean cricket club.”

Current members and their predecessors have already made significant progress over the past nine years. The KCA started an Adidas sponsored league in 2007 - the KCA Adidas Cricket League Cup - and what started as a nine-club league has expanded to 13, including three new clubs consisting of players from Bangladesh, India and Pakistan, which joined mid-season. The expansion was possible due to the availability of another oval-shaped field on Ajou University, Suwon campus.

“We had at least two other teams that wanted to join our league, but we had to turn them down,” Lee said. “If we can get a hold of more fields, we can add more teams.”

Although the Dragons have yet to earn a domestic league win - which plays the condensed Twenty20 version of the game that usually lasts about two-and-a-half hours - the team managed to win one of their five games at the 2008 Philippine International Cricket Sixes. At the tourney consisting of amateur club teams in Asia, the Dragons were able to pull off their historic first-ever win against a club from Hong Kong.

Korea has also been closing the gap in its biannual Korea-Japan showdown. Korea has lost all three of its games since 2004, but has made steady progress. Considering Korea has roughly 200 cricket players compared to 6,000 in Japan, it might take a few more years, proper funding and some sponsorships for the Dragons to top their neighbors.

“It’s a tradition to play Japan every two years in August,” said sophomore team member Ha Sang-hoon. “However, we decided to cancel the event this year due to a lack of funding. It would’ve cost each player approximately 800,000 won in expenses to make the trip to Japan.”

While the Dragons have come a long way, it’s not lost on the members that they still have a very long way to go before they can reach their ultimate goal: the 2014 Incheon Asian Games.

“You hear about underfunded sports teams that struggle to compete in international competitions,” Lee said. “Well, that’s where we would like to be. We envy such teams because we’re still so far off the radar that most people do not even know of our existence.”

While cricket was officially included as an official event at the 2010 Guangzhou Asian Games, the Dragons will not be competing because the team failed to gain recognition by the Korean Olympic Committee.

Although the Dragons have gained acceptance from the ICC and its regional affiliation, it has yet to earn the trust of the KOC. Inclusion in the KOC can make it easier for the team to compete in international tournaments.

Lee is attending an ICC East Asia-Pacific region annual meeting in Australia this week. He hopes to get the group’s approval to compete in the biannual regional tournament featuring 10 teams.

There are other hurdles to overcome.

Although the Dragons attract an average of six to seven freshmen per season, the biggest concern for the Dragons at the moment is retaining the young players who often decide not to return to the team after serving their mandatory military service or decide to focus their time on preparing for a career after graduation instead of extracurricular activities.

“The fact that I’m participating in something new is appealing and fun,” said Kim Eu-ttum, 24, a junior majoring in sports science and one of the few to have three consecutive years of experience because of his commitment to the Reserve Officer Training Corps.

“We all grew up playing football and baseball in high school, but we’re learning this sport on the go, that’s what makes it fun,” Kim said. “We’re an athletic group, but have not won a game. I’d like to be a part of a winning game before I graduate next year.”

Team members said an experienced junior player like Kim is a rarity on the squad.

Ha, a sports science major, is also in ROTC. Since officers in training are allowed to serve their mandatory two-years of service after graduation, it allows players with four consecutive years to hone their game with the Dragons.

“I thought about enlisting in the ROTC program, but my newfound interest in cricket reaffirmed my decision to become an officer,” Ha said. “The opportunity to compete in a sport that’s fun, and to compete in international competitions as a national team member are some of the draws of playing on the cricket team for me.”

Of the sophomore members on the squad, three others have decided to become officers.

It’s part of the reason why the Dragons are open to accepting new players regardless of their school or social affiliation.

It’s also not lost on the Korean Cricket Association that other university teams and cricket clubs at the grassroots level are essential in order for the sport to take root in the country.

“We have contacted several universities over the years about starting a cricket club,” Lee said. “Daejin University has shown strong interest. There are teams at foreign language high schools, but we want to work on creating teams in the future at the grassroots level.”


Diversity on the pitch

In a society in which multiculturalism is still a relatively foreign term, the weekend league also allows members to embrace diversity. In this league, people come from all walks of life and distinct backgrounds, coming together to share a common interest.

Some are migrant workers while some are well-to-do businessmen. But there are no social or racial barriers.

“All participants were a bit awkward at first but since most of the players in the league speak Korean well, we’ve come to bond with other teams quite well over the years,” Ha said. “I was once hit with the ball during a game and as you may know, cricket balls are very hard. Well, a player on the opposing team shouted across the field in fluent Korean asking if I was okay. That was totally unexpected and drew big laughter from both sides.

“Aside from competition, we held a year-end ceremony at an Indian buffet restaurant owned by one of the members of the league. We honored the league-winning team, runner-up and the most valuable player. The event also provided an opportunity for the entire league to gather for dinner, laughter and good times.”