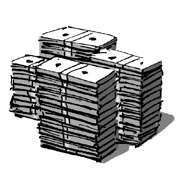 The number that represents the boundless life and work of Amitabha and his followers is “mu-ryang-dae-su.” A direct translation of the word is “a boundless big number,” but it also means raising 10 to the 68th power. When Chinese characters are used, it is the largest numerical unit, but in practice, the largest unit used is the gyeong. The gyeong raises one trillion to the 10,000th power. Therefore, it has 16 zeroes. Outside of engineering or astronomy, there is almost no need to use a unit bigger than the gyeong.

Larger units were introduced in the “Sunzi-suanfa,” a Chinese textbook on mathematics and a product of Buddhist influence.

For example, “hang-ha-sa” originates from a metaphor about the impossibility of counting the number of grains of sand in the Ganges. Certainly, there was no need to count grains of sand in the old days. It must have been used to teach people that the world we are living in is almost nothing compared to the limitless universe and that the number of stars in the sky is incalculable.

Although gyeong is used to count large numbers of things, it is a difficult concept for us to fathom. It is said that the number of cells that are created and disappear in a human body from conception to death at age 80 or 90 is 1 gyeong. And the number of ants on earth is 1 gyeong. If we covered the ground with 10,000 won banknotes, we could cover South Korea 474 times with 1 gyeong in won. Still, it is not clear how big the amount is. In one theory explaining the birth of the universe, there appears a huge loop-shaped “string of the universe.” The mass of the string per unit is 1 gyeong ton.

Meanwhile, a recent report said that the financial assets of Korea have exceeded 1 gyeong won for the first time in history.

According to a recent report by the Bank of Korea, the aggregate amount of financial assets held by individuals, businesses, financial companies and the government amounts to 1 gyeong 3 trillion and 600 billion won. That is about 9.4 times bigger in scale than Korea’s GDP last year.

The amount of financial transactions made through Internet banking and the amount of derivative products traded in a year have exceeded 1 gyeong, according to the report.

If all Koreans live well with such an ample amount of money in our society, there is nothing better than that. But it seems this is not the case. I think 1 gyeong of financial assets is the story of a remote foreign country for low-income people and small and midsize businesses. The actual economic sentiment they feel is still very bad.

Salaried employees worry about their livelihoods and restaurant owners feel anxious when customers ask for more green vegetables for free.

Even in a world of 1 gyeong won, is it so impossible for all Koreans to be happy?