Lee chooses audit board boss to be prime minister

Lee chooses audit board boss to be prime minister 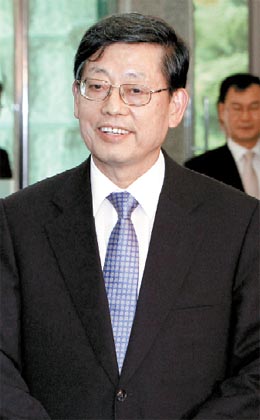 Kim Hwang-sik, head of the Board of Audit and Inspection and a former Supreme Court justice, was named by President Lee Myung-bak to fill the prime minister vacancy in his embattled administration.

“During his 38-year career as a public servant, Kim’s integrity and diligence have been highly respected,” Yim Tae-hee, presidential chief of staff, said yesterday. “We believe he is the best person to implement the administration’s manifesto of [making Korea] a fair society.”

“I will do my best to assist President Lee in making Korea a strong, wealthy nation and a fair society with my 38 years of experience as a public servant, if my nomination is confirmed,” Kim said yesterday. “I will serve and communicate with the people with a humble attitude.”

Lee’s previous nominee for prime minister, Kim Tae-ho, was supposed to represent the president’s desire for “generational change” in Korean government. Kim was 47. He had to withdraw from the nomination after being savaged with bribery accusations in his National Assembly confirmation hearings.

Kim Hwang-sik is 62, but he has advantages Kim didn’t have. First, he heads the government agency that monitors other government offices for fraud and waste. Kim was considered clean in that job and as a former Supreme Court justice.

Secondly, Kim sailed through his previous confirmation hearing to become chairman of the Board of Audit and Inspection in 2008.

And thirdly, Kim is a native of Jangseong, South Jeolla, part of the country’s southern region that has traditionally been the stronghold of liberal opposition parties. His ties with the region is expected to defuse the type of harsh criticism from the opposition during confirmation hearings that sank his predecessor.

Presidential chief of staff Yim admitted that Kim’s regional affiliation was a factor in his nomination.

“If the National Assembly confirms his nomination, he will become the first South Jeolla native to become the prime minister in history,” Yim said. “The president saw the historic significance of that when making his final decision.”

After studying law at Seoul National University, Kim passed the bar exam in 1972 and completed his judicial training in 1974. He worked as a judge in various courts until he was named the nation’s audit board head in September 2008. During his career as a judge, Kim headed Gwangju District Court from 2004 to 2005 and the Ministry of Court Administration in 2005. From November 2005 to July 2008, he sat on the Supreme Court.

The initial reaction from the opposition Democratic Party was favorable. “The choice is positive because the appointment will at least end the unfair dominance of key posts by Gyeongsang natives in the Lee administration,” said Cho Young-teck, spokesman for the DP. “Kim’s qualifications had been verified since he served as a Supreme Court justice and the head of the audit board, but we will still scrutinize his fitness through the National Assembly confirmation hearing.”

DP floor leader Park Jie-won also spoke favorably about the nomination. “I cannot deny the effect of regional reconciliation,” Park said. “His abilities are great, but we will still thoroughly verify his qualifications.”

The ruling Grand National Party welcomed the nomination. “Kim is highly trusted in the legal community and has been successfully performing his job as the head of the audit board,” said GNP spokesman Ahn Hyoung-hwan. “He is a man of trust and ability. A native of Jeolla, Kim will contribute greatly to end regional conflicts.”

Ahn urged opposition parties to refrain from character assassination at the confirmation hearings for Kim and other ministerial nominees. “We expect the opposition parties’ cooperation to end the administrative vacuum,” he said.

The most sensitive issue was Kim’s exemption from mandatory military service. Under the nation’s law, all able-bodied men are required to serve in the military, and draft-dodging by public servants or their sons has derailed many careers.

Yim explained that Kim was exempted from military service in 1972 because of his anisometropia, a condition in which the vision in the left and right eyes differ by a large margin. “Since then, the standard has changed, but we checked with the Military Manpower Administration and confirmed that Kim’s exemption was legitimate,” Yim said.

“When we offered the post, Kim declined it several times because he felt burdened about the possibility that his military exemption would influence the appointment,” Yim said. “But it’s not like he dodged military duty. His physical condition was unfit. So, we believed it was not an obstacle.”

“Kim admitted that there had been a mistake because he was not accurately informed about the system and already paid the amount.”

Kim’s borrowing of 200 million won ($171,969) from his two elder sisters was also an issue. Yim said Kim had paid off half the money, which was used to plan for his daughter’s wedding, and will pay off the rest in the future.