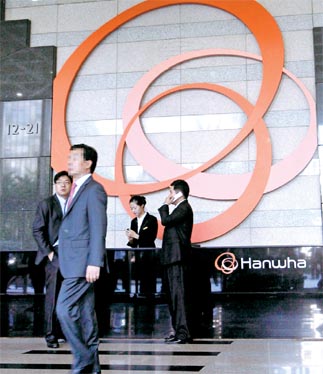 The headquarters of Hanwha Group in Janggyo-dong, Seoul, yesterday. Prosecutors raided the headquarters and offices of Hanwha Securities in Yeouido yesterday to see if the company is maintaining a large slush fund. By Choi Seung-shik

Prosecutors yesterday raided the headquarters of Hanwha Group, Korea’s 10th largest conglomerate, and its affiliate Hanwha Securities, as part of an investigation into whether the company created a slush fund with company money.

Ten investigators from the Seoul Western District Prosecutors’ Office will scrutinize confiscated records and hard disks to see whether the company maintains an illegal secret fund.

“There’s circumstantial evidence that Hanwha Securities allegedly raised the fund with several suspicious bank accounts,” a prosecutor said, “and the raid was part of an effort to find out what the fund is for.”

Prosecutors have been investigating Hanwha since auditors at the Fair Trade Commission reported to the Supreme Public Prosecutors’ Office in July that they discovered five borrowed-name bank accounts at Hanwha Securities. A former Hanwha Securities official tipped off the Fair Trade Commission about the suspicious bank accounts.

Investigators said they obtained circumstantial evidence that Hanwha Group’s secretariat contacted the ex-worker to persuade him not to report the matter but failed.

“This shows that there’s a likelihood that the company systematically raised and kept the slush fund,” the prosecutor said.

Prosecutors also discovered 30 new bank accounts kept under the names of Hanwha officials. They are wondering if the securities firm maintained large sums for Hanwha Group Chairman Kim Seung-youn and his relatives.

“The accounts in question have nothing to do with a slush fund,” said an official who asked not to be identified. “The amount saved in the bank accounts aren’t big enough to say they’re a slush fund, and they’ve been neglected for a long time since they were opened. The truth will come out someday through the prosecution’s investigation.”

Kim was convicted in 2007 for assaulting bar employees to avenge an assault on his college-aged son and given a suspended prison sentence. He received a presidential pardon in August 2008.