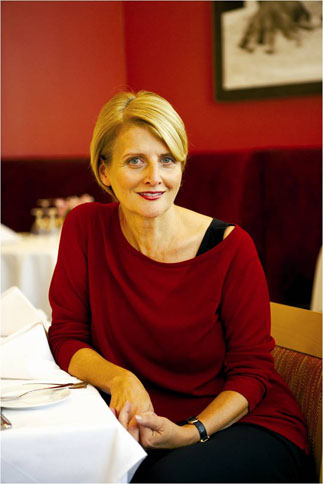 Dorothy Hamilton, founder and CEO of the International Culinary Center and the Italian Culinary Academy in New York, has started to take note of Korea.

She visited Seoul recently for the Culture 20 and hopes to start a food project here.

The New Yorker runs an educational empire of Western cuisine in her home city.

Hamilton said she learned a lot about Asian cuisine during her time in Thailand when she was in the Peace Corps in 1972.

She said she learned about the diversity of cuisine and started to consider a career in food.

“I was used to having coffee and bread for breakfast until I came to the land where people eat noodles and rice in the morning,” Hamilton said.

Her urge to travel the world took her to France, where she stayed during her vacation while studying for her bachelor’s degree in England.

There, she was amazed by French cuisine after having her fair share of fish and chips in England. She said she saw the potential to build a career in the food industry.

That’s when she came up with an idea that would change her life forever: open a French culinary school in the United States.

“I convinced my father that we should open a cooking school, and use the French school curriculum,” said Hamilton.

To make sure it was as authentic as possible, she flew French cooks to New York. Almost overnight, French chefs in the city were raving about the school. The French Culinary Institute, founded in 1984, is so popular that there is a waiting list to be enrolled.

“Our school [trains] students to get the very first job in a good place,” she said.

Hamilton does not have plans to open a school in Korea. But she is considering projects that could include Korean cuisine, because she said she witnessed a lot of potential from Korean international students taking classes at her school.

She is fond of Korean food and is always eager to follow up on recommend places by her Korean friends.

Hamilton chooses temple cuisine as her favorite among the Korean dishes she has tried.

“It is possible to taste different textures in one spoonful of food. And there I can taste Earth,” said Hamilton.

Most importantly, she pointed out that the key to these dishes was the lack of salt. She also mentioned that the pine tree wine she tasted was unforgettable.

Her interests in Korean cuisine broadened after she met Susie Park, CEO of Susie’s restaurants in Itaewon.

“As Susie said, we should have met earlier,” Hamilton said. Ever since she met Park, Hamilton has been making countless trips to Korea.

Hamilton got to see spring in Korea this March, summer to fall on her most recent trip, and she plans to visit again in January. Her itinerary even included a trip to the Blue House, where she dined with first lady Kim Yun-ok.

She said networking is one of the most essential skills for her students to possess at her school, and is hoping to expand her business in Korea within the food industry so that the Korean students studying at her school can get help in the job search.