Two Koreas possible in U-17 event

Two Koreas possible in U-17 event 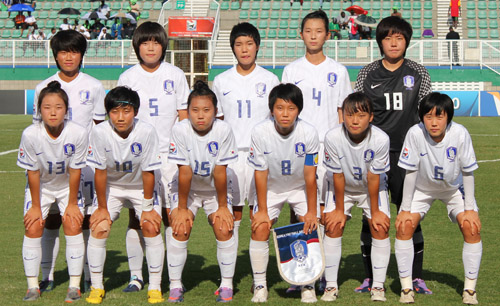 The South Korean U-17 women’s national team pose prior to its U-17 Women’s World Cup Quarterfinal match against Nigeria on Thursday. [YONHAP]

Three Asian teams have managed to advance to the final four over the weekend at the U-17 Women’s World Cup in Trinidad and Tobago, setting up the possibility for a showdown between South and North Korea in the finals.

South Korea came from behind to defeat Nigeria 6-5, North Korea upset tourney favorites Germany 1-0 and Japan downed Ireland 2-1 on Friday. South Korea will take on Spain - which managed to defeat Brazil 2-1 in the quarterfinals - on Wednesday at 5 a.m. (KST). North Korea will play Japan on the same day at 8 a.m.

“We have scouted and evaluated individual talent on the Spanish team to a certain degree,” the U-17 national team manager Choi Duck-joo told Yonhap news agency. “For many obvious reasons, it is our hope to reach the finals with North Korea.”

South Korea will face a tough opponent in Spain, which recorded three wins and no loses to earn first place in Group C.

Led by Paloma Lazaro, Spain scored nine goals and allowed three in the group stage. But more impressive was Spain’s performance in the qualifiers leading up to the World Cup. Spain stormed through its regional competitions with a record of five wins and three ties, while scoring 36 goals and conceding merely three goals in the process.

It remains to be seen if South Korea can become the first team to beat Spain this year, but with an attack led by Yeo Min-ji, who leads the tournament in scoring with seven goals and two assists, the national team is confident about its chances.

In the quarterfinals, Korea gave up two goals in the first three minutes of the game but stormed back from the early two-goal deficit to defeat a strong offense in Nigeria.

Yeo proved an integral part of South Korea’s offense by again managing to score a hat-trick in the game and adding a goal off a penalty kick.

“I want to win the tourney and the golden shoe, [an award for the top scorer in the tourney],” said Yeo. “In playing 120 total minutes, we had to overcome some obstacles but we also realized that anything is possible when we give it our all.”

Having earned two wins and one loss on six goals for and three against, many figured Germany to breeze through their quarterfinals matchup.

The Germans - which has three players on the top 10 scoring leaders list - breezed through their group-stage matches with three wins and no losses on 22 goals. The Germans not only scored the most goals in the group stage but also allowed just one goal in the process. But a well organized North Korean unit was able to shutout the powerful German offense.

Kim Kum-jong, who scored her fourth goal of the tourney against Germany, is the leading scorer for North Korea.

Japan boasts a dangerous duo in Kumi Yokoyama and Mai Kyokawa, who have scored five and three goals, respectively.