Choo has monster of a weekend with Indians

Choo has monster of a weekend with Indians 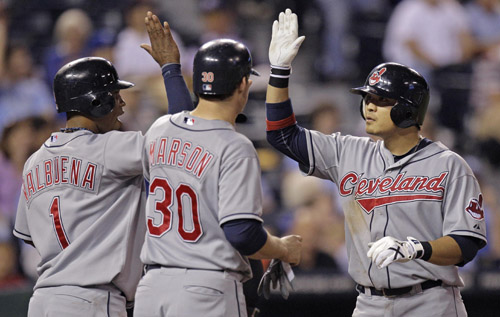 Cleveland Indians right fielder Choo Shin-soo had a monster of a game over the weekend against the Kansas City Royals and took a big step closer to hitting 20 home runs and stealing 20 bases for the second consecutive season.

Choo belted home runs in three consecutive at-bats - including his third career grand slam in the sixth inning - to lead the Indians to an 11-4 blowout win over the Royals at Kauffman Stadium on Saturday.

Choo started with a two-run homer in the fourth inning, then after the grand slam in the sixth he capped off his seven-RBI game with a solo shot in the eighth.

“Maybe the best game of my life,” Choo was quoted on his team’s Web site. “I’ve not been swinging well the last two weeks. So many fastballs I fouled off. A lot of things were on my mind. Tonight, after the ground-ball double play, I talked to [Travis] Hafner and said, ‘Maybe I just see the ball and swing at it.’”

Choo became the 31st Indians player to hit three home runs in a game and the first on the team to do so since Hafner on July 20, 2004 in a game against the Los Angeles Angels. Choo is also the 13th Indians player to hit home runs in three consecutive at-bats and the first since Manny Ramirez smacked three in a row Sept. 15, 1998, against the Toronto Blue Jays.

With the impressive outing, Choo improved his batting average to .291 and now has 19 home runs, 18 steals and 79 RBI. Choo became one of only four American League players and the first Asian player ever to hit 20 home runs and steal 20 bases last season when he hit .300 with 20 home runs, 21 steals and 86 RBI.

Choo was also selected to Korea’s 2010 Asian Games national baseball team and can earn an exemption from his mandatory military service if Korea manages to win a gold medal. Choo will be eligible for arbitration after this season.