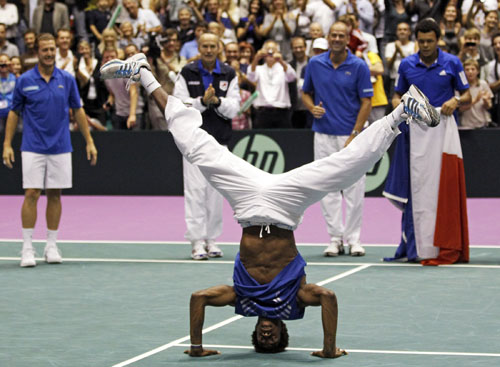 PARIS - Nine-time champions France eased into the Davis Cup final on Saturday, but Serbia’s decision to throw unfit world No. 2 Novak Djokovic into doubles action backfired against the Czech Republic.

France opened up an unassailable 3-0 lead in their semifinal against Argentina in Lyon when Michael Llodra and Arnaud Clement defeated U.S. Open semifinalists Horacio Zeballos and Eduardo Schwank 6-4, 7-5, 6-3.

In December’s final, they will tackle either last year’s runners-up Czech Republic or Serbia, who have never reached a Davis Cup final.

Djokovic, who was the U.S. Open runner-up to Rafael Nadal on Monday, pulled out of his scheduled singles event on Friday, a reported victim of gastroenteritis.

In his absence, Viktor Troicki was beaten by Stepanek before Janko Tipsarevic leveled the tie with a victory over Berdych. “It was a smart decision for me to skip the singles on Friday because I didn’t feel well all day,” Djokovic, who was warned for smashing his racquet in frustration on Saturday, told www.daviscup.com.

“But today was different and hopefully tomorrow will be even better. We have to keep our heads up.”

Djokovic is tipped to play singles on Sunday, where he would face Wimbledon runner-up Berdych, the man who beat him at the All England Club in the summer. Tipsarevic would then face Stepanek in the final singles.

“It was great to come back after losing the first set. It was down to our team spirit which was greater than theirs today,” Stepanek said.

France had already been 2-0 ahead overnight thanks to singles wins by Llodra over Juan Monaco and Gael Monfils, who beat David Nalbandian. On Saturday, Llodra and Clement wrapped up a victory after 2 hours and 28 minutes on the court.

“It’s extraordinary to have a team like ours,” said French captain Guy Forget, whose team last made the final in 2002.

Although they were without their injured number one Jo-Wilfried Tsonga, Guy Forget’s team, who beat holders Spain in the previous round, went on the attack in all their three

Tito Vasquez, the Argentina captain, was stunned by the defeat.

“I never thought the result would be so bad. We always thought we could win it,” he said.

The U.S., 32-time champions, are attempting to avoid a first relegation in 22 years. Captain Patrick McEnroe took a gamble by not naming doubles specialists the Bryan brothers in the team, but he believes he has been vindicated.

“The altitude had a lot to do with it [with the absence of Bryans],” said McEnroe. “I felt that we might need a couple of extra singles players. Fortunately, Mardy gives us choices as a great singles and doubles player.”

It was the Indian pair’s 24th successive Davis Cup win, a record for the competition. Kazakhstan reached the World Group for the first time by taking a 3-0 lead over Switzerland in Astana after Andrey Golubev and Yuriy Schukin defeated Yves Allegro and Stanislas Wawrinka 6-4, 6-3, 6-3.

Switzerland is playing without Roger Federer.