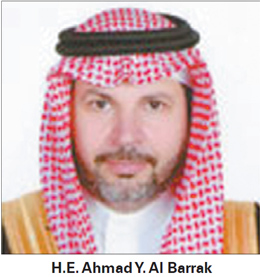 Celebrations surrounding National Day in the Kingdom of Saudi Arabia this year come amid the renaissance march, which was initiated by the country’s founder, His Majesty King Abdul Aziz Al-Saud, who laid the foundations for the kingdom’s ideological, institutional and administrative pillars.

To this day, the nation is still guided by his ideas and inspired by his rich experiences in the fields of development planning and economic administration, which have helped the country reach success in a variety of fields.

A mosque in Medina, Saudi Arabia

The improved standard of living for citizens of the Kingdom as well as the country’s comprehensive urban and industrial renaissance, its burgeoning infrastructure and its advanced economic and social services reflect these proud achievements.

The success Saudi Arabia has seen as of late presents clear evidence of the effectiveness of the Kingdom’s approach to development.

Over more than three decades, the country has undergone a number of structural developments on the economic and social fronts that are visible on both the macro and micro levels.

The Kingdom’s economy developed numerous powerful elements that have enabled it to offset global volatility and increase its ability to adapt to sudden changes and developments that can sink other nations financially.

In recent years, Saudi Arabia has witnessed a remarkable increase in direct foreign investment (FDI), becoming the leading country in the Middle East in this area.

The Kingdom ranked 16th among 181 countries in 2008 for attracting FDI, according to the International Finance Corporation, an affiliate of the World Bank Group.

Given that the Saudi citizen is at the center of development and the country’s ultimate goals, fostering human resources received particular attention in the renaissance march. Education and training have become particularly important and have helped fuel overall growth.

The Kingdom has assumed a prominent place on the global stage and become an active member of the international community, thanks to God and to its economic and social progress.

Saudi Arabia is among the top donor countries when it comes to lending a helping hand to those in need.

The total value of the Kingdom’s aid and developmental assistance to developing countries through various channels reached more than $90 billion from 1973 to 2007.

The aid made its way to 87 countries worldwide, primarily nations in Africa and Asia.

The Kingdom’s aid exceeded the UN’s recommendations that donor countries set aside 7 percent of their GDP for such efforts.

The country’s efforts to support projects in developing countries are not only confined to monetary assistance and aid but also involve contributions to many regional and international development institutions that support international initiatives and work to solve development problems these countries face.

In a bid to strengthen bilateral relations, Saudi Arabia has attempted to work more closely with Korea in recent years.

The meetings helped push bilateral relations into a new phase of promotion and development. A whopping seven memorandums of understanding were signed during Roh’s visit to the Kingdom.

Korea is an important partner to the Kingdom, as it’s a developed country with vast experience and international influence as a member of the G-20 - not to mention the trade relations between the countries.

Extending bilateral relations could help strengthen political and economic ties, which will lead to growth for both sides. Trade relations between Saudi Arabia and Korea have grown steadily during the last five years, which is reflected by the 300 percent growth in trade volume over that period. The number of joint ventures - including those in the industrial sector - also hit 98 over those five years.

I pray that almighty God will grant success to the leader of the renaissance march, the Custodian of the Two Holy Mosques King Abdullah Bin Abdul Aziz Al-Saud, as well as His Royal Highness Crown Prince Sultan bin Abdul Aziz Al-Saud. May God protect them for their tireless efforts to promote the Kingdom and make its people happier.

I also pray to God that the Kingdom of Saudi Arabia will achieve every goal it map out and is able to enhance its relationship and friendly ties with the Republic of Korea.