Archrivals Korea, Japan set to clash in U-17 World Cup

Archrivals Korea, Japan set to clash in U-17 World Cup 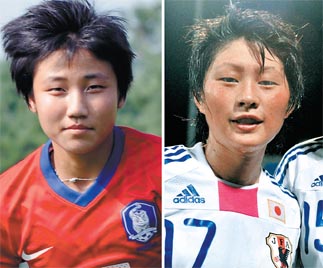 Archrivals Korea and Japan will put their pride on the line as they clash in the U-17 Women’s World Cup for their first ever international football title on Monday morning.

The U-17 national team has already reached a significant feat by becoming the first Korean squad - men’s or women’s - to reach the finals of a FIFA-sanctioned tournament.

U-17 women’s national team manager Choi Duck-joo and his ladies hope to do one better by defeating their rivals and bringing home Korea’s first title at an international tourney.

“Since they have several talented players, we need to pressure them,” said Choi in a post-game interview. “It’s going to be a battle. When facing Japan, it’s a unique relationship that goes beyond wins and losses. I will stress this point to my players.”

Korea has the slight edge over Japan going into the match.

The two sides met in the Asian Football Confederation qualifiers semifinals with Korea coming out on top, 1-0. Korea will look to its sniper Yeo Min-ji to deliver in the big match.

Having netted eight goals and a third assist in the tourney so far, Yeo has all but clinched the golden shoe award, but more importantly, she has provided Korea with crucial goals throughout the tourney.

Joo Soo-jin, Yeo’s partner up front was impressive against Spain in the semifinals, dribbling by three Spanish defenders and goalkeepers to score the winning goal.

In the semifinal match against Spain Wednesday morning, Amanda Sampedro opened the scoring in the 23rd minute of the match.

However, Yeo connected on a header two minutes later to draw even and then assisted on Joo’s go-ahead goal in the 39th minute to help Korea reach its first ever finals at an international football tourney.

Korea scored 15 goals and allowed 11 in five games so far. Although Korea has not been the most dominant squad, it has shown plenty of speed, strong character and determination in pulling off several come-from-behind victories.

Japan will also be gunning for their first football title. Japan is coming off a semifinal match in which it conceded the opening goal to the North Koreans but scored two consecutive goals to book a place in the finals.

“They pale a bit in comparison to other top teams in terms of scoring,” Choi said. “But that’s about the only weakness. We have Yeo, who has the ability to deliver on chances.”

If Korea has Yeo leading its fast-paced attack, Japan has its ace in Kumi Yokoyama leading a creative offense. Yokoyama is currently third in the tourney with six goals and managed to score the game-winner in the semifinals against North Korea. North Korea and Spain will play in the third-place match on the same day.