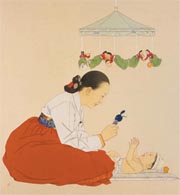 To Sept. 25: Through her work, Shin Sun-mi attempts to depict subtle movements that are often overlooked, like the ants that gather around bread crumbs. Her paintings are inspired from her personal experiences.

The pieces look almost lifelike, with women in traditional clothing doing ordinary housework. But with her detailed portrayal of the surroundings, Shin turns the traditional setting into something that transcends time and space.

The exhibition shows Shin’s “While You Were Sleeping” series, comprised of paintings depicting Korean women, and her “Korea, China and Japan” series, depicting the women of the three countries. 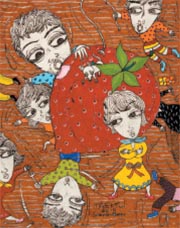 To Sept. 30: The Opera Gallery introduces works by Koh Myung-keun, Yim Tae-kyu and Hong Sang-sik, artists who use unique methods and distinctive techniques to create new forms of art.

Koh employs his “photo sculpture” technique, which plays with the illusion between two-dimensional images and three-dimensional structures, in his works. Yim takes modern people and places them in traditional settings. Hong engages with objects that cannot be seen every day. All three artists use very simple techniques to reveal something about subjects that seem simple but are actually complex. The end result are works of art that put a new spin on the original item.

The gallery is open from 10 a.m. to 7 p.m. everyday except national holidays.

To Nov. 21: To commemorate the 22nd anniversary of the 1988 Seoul Olympics, the Soma Museum of Art is presenting the largest exhibition on drawing in Korean history, featuring more than 300 pieces from 70 Korean artists from 1970 to 2000.

Drawing is a rapidly changing art form affected by the trends, environment and fashion of the time, making generational changes difficult to note. This exhibit helps shed light on those changes, as well as larger developments in the Korean art scene.

The exhibit also includes many pieces by well-known artists that will be shown here for the first time. 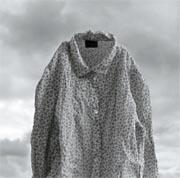 The Museum of Photography, Bangi-dong

To Dec. 4: Yuki Onodera is a self-taught photographer whose style is not easily defined.

She takes things like old clothing, found objects and people and shoots them with a stereo camera. She then uses various methods of photographic development, digital retouching and other techniques to reinterpret the images.

After the process is complete, the photos do not look like they were taken with a camera yet give the impression of classic photographic techniques.

Onodera is the winner of the 1991 New Cosmos of Photography Award and has shown her work at various locations around the world.

This exhibition shows 72 of her 12 most well-known series. It was shown at the Tokyo Metropolitan Museum of Photography in July and will be held in France in 2011.