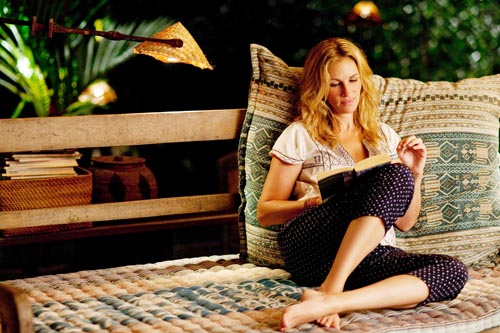 
“Eat Pray Love” does exactly what it should to satisfy its core audience: it provides a gorgeous escape, exquisitely photographed and full of female wish fulfillment.

Yet it also offers sufficient emotional heft and self-discovery to make you feel as if you’ve actually learned something and, perhaps, emerged a better person solely through osmosis.

It’s easy to see why author Elizabeth Gilbert’s memoir became an international phenomenon, even without help from Oprah. Everyone’s looking for something - for answers, for their true and higher purpose - and Gilbert had the fortitude (and the wherewithal) to take off alone on a journey around the world to find herself after her divorce.

Having Julia Roberts star as Liz Gilbert in the film version of the best-seller, in theory, only makes it more appealing to an even wider audience. Roberts is radiant as ever, and director and cowriter Ryan Murphy’s adaptation allows her to show off her full range with plenty of hardcore hanky moments.

Not unlike the production numbers in Murphy’s juggernaut TV series “Glee,” the search for meaning in Eat Pray Love is played with complete earnestness. But even cynics viewing this movie (or the vast majority of men) would find it hard not to be impressed by the lush visuals and, on a more substantive level, moved by some of the performances.

In the India section of the story, Richard Jenkins pretty much steals Eat Pray Love away from Roberts as the hippie Texan who serves as the voice of reason when Liz is feeling lonely and sorry for herself. She accuses him of talking in bumper stickers - which the script from Murphy and Jennifer Salt is frequently guilty of, as well - but he shakes things up and, more crucially, delivers one hell of a monologue in which he describes what led him to the ashram. Jenkins is such an intelligent, honest actor, he makes every moment feel authentic. He kind of makes you want to see a movie about his character instead.

Eat Pray Love will make you want to head out for wine and pasta with your girlfriends afterward. Any excuse will do, and this is a good one.