Selling the objects of desire

Selling the objects of desire 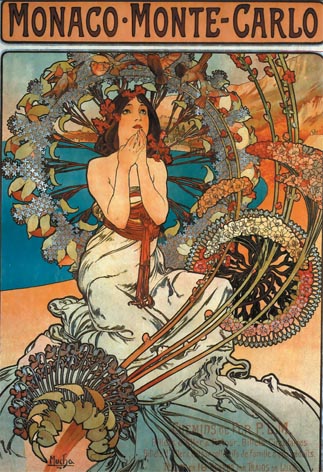 The walls of Seoul’s subway stations were once plastered with advertising campaigns for various provinces. Each ad featured a picture of the province’s governor, an awkward smile on his face, extending his hands and seeming to say, “Come to our province,” with shots of local products and scenic spots from the region floating in the background.

The ad campaigns were too similar to be distinctive and their extreme banality decreased my curiosity about the region rather than piquing it.

So when I saw advertising posters by Czech painter and designer Alphonse Mucha (1860-1939), I was surprised and delighted because they had a sophisticated beauty to which the Korean ads had aspired but had not yet managed to achieve.

His “Monaco Monte Carlo,” for example, which was commissioned by a French railroad company, beckons viewers to depart on a spring trip to the beach resort town. But the poster doesn’t tout the city’s attractions. Instead, it shows a woman in a white dress, ringed by exploding fireworks in the shapes of flower garlands, which symbolized spring scenes full of blooming flowers and a festive mood.

The poster is painted in the style that later became known as Art Nouveau, which was known for its rhythmic and elegant lines.

The ads were less about the product and more about the image of beauty they evoked, making them very similar to the cutting-edge ads of today that attempt to do the same. The fact that such artistic ads were being made in the late 19th century indicates that companies had already begun to give a great deal of thought to how their goods and services should be advertised.

At the time, people who were fascinated by the artistry of the ads began removing them from the walls or bribed workers to deliver the posters to them directly. In our time, it is similar to people taking images or video files of TV commercials and posting them on their blogs. 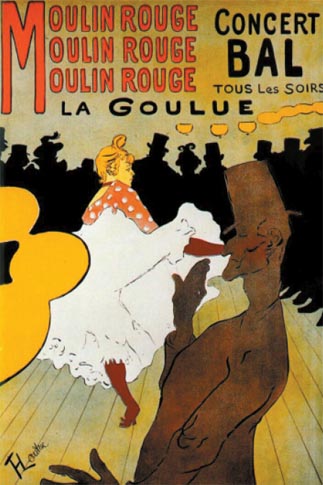 As capitalism matured, advertisements, which have been called the essence of capitalism, have obtained a special status.

Of course, the history of advertising is quite long. Some scholars say that the Rosetta Stone, engraved with an ancient Egyptian pharaoh’s accomplishments, is a kind of advertisement.

Commercial advertisements appeared in British newspapers in the middle of the 17th century in the form of ads for chocolate or tea. These early ads were just text, though sometimes they were accompanied by simple black and white drawings, and they focused on the simple delivery of information.

It wasn’t until the arrival of the Industrial Revolution that advertising came of age. As companies began mass producing their products, competition increased and advertising became more important to a product’s success. At the same time, new printing technologies, including chromolithography, which allows for multi-color printing, were developed, making it possible for companies to create flamboyant ads to catch consumers.

Finally, in Paris in 1866, Jules Cheret (1836-1932) set up a lithographic printing workshop where he produced posters brimming with vivid colors. His work ushered in a golden age for posters and signaled the beginning of modern advertisements. Soon, the streets of Paris were decorated with posters by Cheret and other masters like Mucha and Henri de Toulouse-Lautrec (1864-1901).

Toulouse-Lautrec, who lived in the entertainment district of Montmartre at the time, made posters primarily for cabarets and circuses. One of these is “Moulin Rouge - La Goulue.” The poster for the famous cabaret shows La Goulue, a French can-can dancer and the dance hall’s star, as she wildly brandishes her skirt and kicks up her leg.

In the poster, La Goulue - whose real name was Louise Weber - is in the spotlight, while Valentin, another popular Moulin Rouge dancer, is in the foreground and in silhouette. The spectators are some distance away in the background and are also shown in silhouette.

The poster vividly portrays the mood of the dance hall, where the lighting was dim in the house but bright on stage. It was a bold and innovative depiction of the cabaret scene.

The posters were important not only for their artistic value, but also demonstrated a so-called democratization of consumption in capitalist society. The posters by Mucha and Toulouse-Lautrec were installed on the bustling streets of Paris, where anyone could see them. And anyone could purchase the goods and services they advertised - including the entertainment at Moulin Rouge - as long as they had the money.

Before the political and industrial revolutions, access to goods and services was differentiated by class. The stratification was so severe that it was difficult for even rich merchants to attend a concert in the house of a nobleman.

But anyone could go to Moulin Rouge.

Liberalization and democratization of consumption is capitalism’s charm but also its pitfall, and some scholars say that advertisements are an extreme visualization of this.

British art critic John Berger (1926- ) once said that ads are closely related to the term “freedom” and that for companies, it is a freedom of business. For consumers, it is a freedom of choice that is, at best, a freedom to choose this or that product. Meanwhile, the message of all ads is the same: that life will improve only by buying something and the only thing that matters in life is purchasing power, which arrests people rather than frees them, Berger said.

Another ironic aspect of advertising is that the more artistic an ad becomes, the more it focuses on making the product desirable, rather than delivering useful information about it.

French sociologist Jean Baudrillard (1929-2007) once said that when modern people purchase something, they no longer consider its “use value,” or function, but consider its “sign value,” the social image they can obtain by buying it.

It is, in other words, conspicuous consumption.

His theory is an extension of that of U.S. economist Thorstein Veblen (1857-1929), who introduced the concept of conspicuous consumption.

I will talk more about Veblen and economist John Kenneth Galbraith in my next article.