Express yourself through fashion

Express yourself through fashion 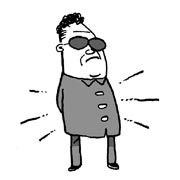 Ronald Reagan (1911-2004) was known as a great orator, but he was also considered one of the most fashionable U.S. presidents, outside of John F. Kennedy. But while Kennedy exhibited a young and progressive style, Reagan projected a mature and experienced image.

Reagan’s fashion philosophy was that the way one looks sends a message.

Today, he is remembered as a president who utilized his clothing as a means to express his political stance. His conservative idea of a “powerful and prosperous America” was contained in the dark suits he liked to wear.

Sociologists define an individual’s clothing as a silent symbol that serves as a communication tool. Just like a speech, an outfit has a unique vocabulary and tone.

In addition to appearance, speech and behavior, it is often possible to determine a person’s character based on what he or she is wearing. High-ranking government officials and conservative politicians, for example, are nicknamed “the gray suits” and their style of dress serves as a metaphor for their character.

In Korea, our ancestors used four standards to measure a person’s character: the body, speech, writing and judgment.

But there was a time when one’s political leanings were expressed through clothing.

In the late-Joseon period (1392-1910), when factional confrontation was at its height, politicians and officials of different political factions wore different clothing styles. One example of this was the bokgeon, a headpiece worn by male politicians. During the reign of King Jeongjo, the members of the Seoin faction wore bokgeon while the members of Namin faction did not. This enraged the king, who asked how they could have different attire when they served in the same court. In the end, the Namin were pressured to wear bokgeon to follow the custom of the Seoin, which was the norm at the time.

It was just one instance in which attire was a symbol of power.

Recently, Foreign Policy magazine analyzed the fashion of 10 dictators around the world. The list included Kim Jong-il, the chairman of North Korea’s National Defense Commission, in his khaki army suit; Hugo Chavez, the president of Venezuela; Libyan leader Col. Muammar al-Qaddafi; and Fidel Castro, former president of the Council of State of Cuba. As Foreign Policy magazine said, “Not all the world’s dictators are clotheshorses, but as these leaders demonstrate, sometimes politics, power and polyester combine to make fashion magic.”

But as you well know, fashion is not the exclusive property of the rich and famous. In the broader world, fashion is perceived as a message that reveals social and political status, an individual’s philosophy and the group to which he or she belongs.

This Chuseok, show the world your true self, but let your clothing do the talking.