Prime minister-designate to be quizzed on 3 issues

Prime minister-designate to be quizzed on 3 issues 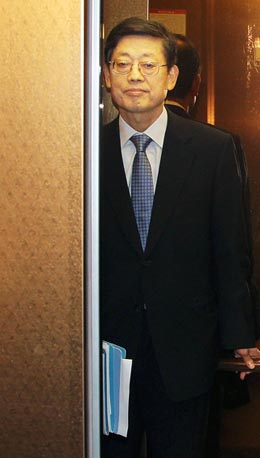 Kim Hwang-sik, the prime minister-designate, reports to work yesterday to prepare for his confirmation hearings. [YONHAP]

Opposition parties are gearing up to grill Kim Hwang-sik, the newest designate to become the prime minister, precluding a rough confirmation hearings next week, as the ruling party prepares to shield him.

Kim, head of the Board of Audit and Inspection and a former Supreme Court justice, was named by President Lee Myung-bak last week to head the cabinet. The ruling and opposition parties quickly agreed to proceed with his confirmation hearing, scheduling questioning sessions for Wednesday and Thursday and a plenary session on Oct. 1 to vote on the motion to confirm Kim’s appointment as the prime minister.

The special committee at the National Assembly decided yesterday the list of witnesses to testify at the confirmation hearing. According to the committee, the Grand National and Democratic parties agreed on three key witnesses to verify the ethics and qualifications of Kim.

Eun Jin-su, a commissioner at the Board of Audit and Inspection, will be summoned to testify about the board’s delayed process to audit the government’s four rivers restoration project. While the Lee administration has pushed forward the signature program, the opposition parties and environmental groups have opposed it. Eun is in charge of the audit on the controversial project, and the Democrats have criticized him and Kim for being slow to conclude the review, allowing the government to proceed with construction in the meantime.

Dongshin University President Kim Pil-sik, an elder sister of Kim, and Heo Gi-taek, head of the Industry-University Cooperation Foundation at the university, will also appear at the confirmation hearing to testify about the allegation that the university has enjoyed special benefits, including lucrative state subsidies because of the school’s ties to Kim’s family.

Where the money was secured for Kim’s wife’s 8 million won ($6,891) diamond necklace - which was purchased during Kim’s service at the audit board - was also questioned by the opposition parties. Kim also faced an accusation about possible election law violation for his remarks made at a lecture in 2006, ahead of the local elections. At the time, he was a Supreme Court justice.

Park Jie-won, the DP’s floor leader and acting head, vowed to conduct a “microscopic examination” of the allegations.

The conservative opposition Liberty Forward Party also stepped up its plan to grill Kim, particularly about a draft-dodging allegation. Kim was exempt from mandatory military service in 1972 because of anisometropia, a condition in which the vision in the left and right eyes differ by a large margin, but critics have questioned the validity of the test at the time.

According to the committee, medical experts and a military-manpower administration official will testify regarding Kim’s military exemption.

Court officials and legal experts will also appear to testify about Kim’s past verdicts.

As the opposition parties prepare to grill Kim, the Grand National Party geared up to protect the prime minister-designate, criticizing the rival parties for politicizing the confirmation hearing.

Stressing that Kim had already passed a confirmation hearing in 2005 to become a Supreme Court justice and in 2008 to be the head of the Board of Audit and Inspection, the GNP said there should be no new obstacles for Kim.

“The president’s decision to nominate Kim as the first prime minister from South Jeolla region is intended to unify the nation and end regionalism,” said GNP chairman Ahn Sang-soo. “The opposition parties must stop picking on his character in a political attack and focus on verifying his ability to manage the cabinet.”