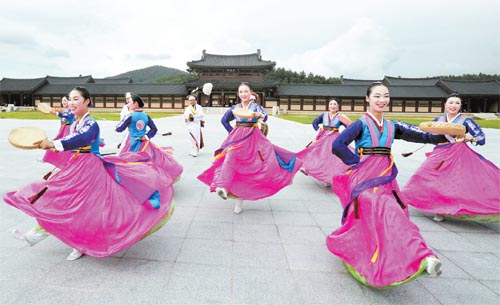 
Of the three ancient kingdoms of Korea, Baekje has always been overshadowed by its larger and more powerful neighbors. Goguryeo gets credit for expanding into northern territory while Silla united the three kingdoms. Baekje was considered by many people to be a failed state.

Today, however, this area in what is now the South Chungcheong region is known for its rich cultural and historical treasures. Its serene temples, intricately carved pagodas and royal tombs draw an increasing number of visitors every year.

The region’s fascinating but little known history is brought to life every year through the 2010 Great Baekje World Festival. The festival began earlier this month and continues through Oct. 17 in Gongju City and Buyeo County, which were capital cities during the Baekje era.

Launched in 1955, the festival is one of the oldest in the nation. It is also the largest of its kind in the region and, thanks to an infusion of government funding, it just got even bigger. 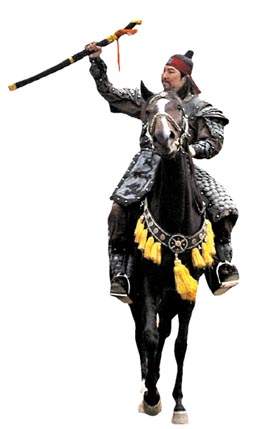 The Great Baekje Cavalcade, involving 123 horses and 100 soldiers, is a must-see event. By Kim Seong-tae

This year’s budget is estimated to be 24 billion won ($20.6 million), which is five times more than that of the previous festival, and 16 local governments in the region are working together to produce the festival.

“Buyeo is the only historic capital city that has not been promoted on a large scale,” Buyeo County Governor Lee Yong-u said, but added that festival organizers are hoping to change that with this year’s event.

The schedule is packed with performances, parades and a host of other programs based on the themes of discovery, exchange and creation.

Featured are performances by groups from over 50 countries including Japan and China, an exhibition of Baekje artifacts and an academic conference on Baekje for scholars from Asia, Europe and the United States.

Among the performances on the festival schedule are two musicals presented on riverside stages that promise to illumine the region’s history.

“The Tale of Sama” is a musical that tells the story of King Muryeong, who ruled Baekje in its heyday from 462 to 523. It is presented on a stage set up on the Geum River, providing a scenic backdrop for the exploits of the king, whose maritime prowess helped him build strong relationships with other countries. It features a cast of 150 actors including Min Yeong-ki, from a 2008 production of the musical “Jekyll and Hide”; Seo Jeung-hyun, from the musical “Hwang Jin-yi” in 2006; and Suh I-suk from this year’s production of the play “Take Care of My Mother.”

“Sabi Mirr,” which features an equally enormous cast and crew, is set near Nakhwaam, or the Rock of Falling Flowers, on Mount Buso in Buyeo and recounts the famous legend of Baekje’s last king, King Euija, and the 3,000 women of his court who, when Sabi Fortress came under the occupation of Silla soldiers, chose to commit suicide by jumping off a cliff rather than live under enemy rule. 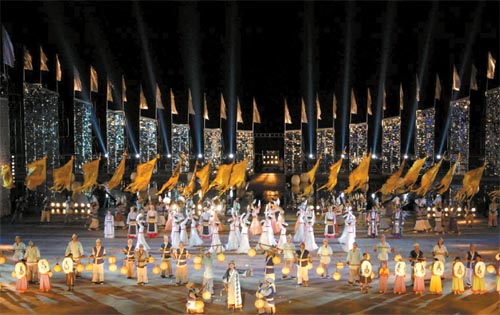 
The musical is presented on a riverside stage that evokes the natural beauty of its historic scenario. It stars stage actor Ryu Tae-ho and musical theater actress Park Min-jeong.

“With the beautiful Geum River in the background, these promise to be the best outdoor performances in the country,” Lee Seong-u, the secretary general of the festival’s organizing committee.

The size and scale of these performances will be matched by two events in Gomanaru, in the city of Gongju, that also recreate events in Baekje’s history. One is a parade called the Great Baekje Cavalcade, with 123 horses, 100 soldiers and thousands of festivalgoers in colorful Baekje masks. The second event is a recreation of the infamous Battle of Hwangsanbeol, in which Baekje’s Gen. Gyebaek and his 5,000 soldiers confronted Gen. Kim Yu-shin’s much larger force of 50,000 soldiers. Although Gen. Gyebaek mounted an honorable defense, he and his soldiers wound up fighting a losing battle to the death that saw most of them dead, including Gen. Gyebaek.

To provide context for these events, the Gongju National Museum is holding an exhibit of about 200 rare relics such as gold crowns from the period.

The festival also offers activities for younger visitors. The most popular, according to the committee, are recreations of a traditional wedding ceremony and a royal guard changing ceremony. Admission to these events is included in the ticket prices listed below but visitors must reserve a spot in advance through the festival’s Web site. 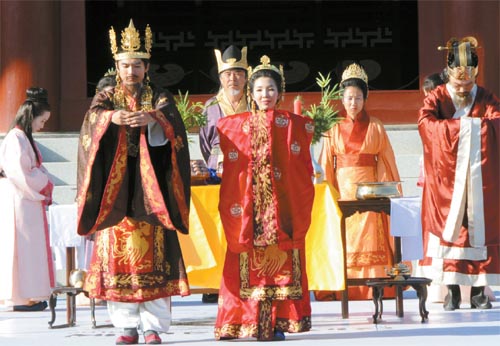 The musical “Tale of Sama,” with a cast of more than 150, recounts the life of King Muryeong, who ruled Baekje in its heyday from 462 to 523. [YONHAP]


There are also guided day-trips to scenic areas in the region. “A Day at Ungjinseong Fortress” takes visitors to a park where they can stroll along lush ponds and Baekje-era houses.

The organizing committee is expecting approximately 2.6 million visitors to the festival this year, of which they estimate around 200,000 (7.7 percent) will be foreigners.

As successful as the festival is, however, there are still some kinks to be worked out before it can expect attendance levels to match that of other, more established regional festivals such as the Andong Mask Dance Festival and the Chuncheon International Mime Festival. Both festivals draw crowds of foreign visitors every year.

The biggest obstacle the Baekje festival has faced is that many of its signs are only in Korean and some of the exhibitions are said to lack content.

Festival organizers are hoping that this year’s expanded program will help them overcome those issues because beyond its role as a vehicle for tourism, the festival also plays an important role in the region’s efforts to promote Baekje as a World Cultural Heritage site.

*Festival admission is 10,000 won ($8.61) for adults and 7,000 won for children and teens. Festivalgoers who bring their tickets to other tourist attractions within South Chungcheong can receive discounts of up to 50 percent on admission fees at 38 spots in the region, including: Sangrok Resort (30 percent discount), Onyang Folk Museum (50 percent), Bear Tree Park (20 percent), Resom Spa Castle (30 percent) and Chollipo Arboretum (20 percent). Festival events will be presented at multiple venues, including the Buyeo County Baekje Cultural Complex and Nakhwaam, Gongju City Gomanaru Ferry, and Nonsan City Nonsan Stream riverside. For more information, visit www.baekje.org (Korean and English) or call (041) 857-6955.