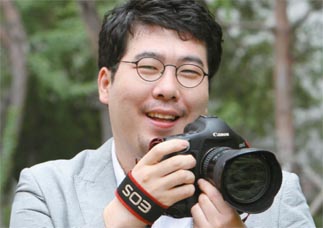 A picture of a 12-year-old boy from Malawi stares from a page on the Good Neighbors Web site. Below the photo, a caption explains that the boy has lived alone in a rundown hut since he lost his parents to malaria, but that he still dreams of becoming a famous football player. He is pictured with a “ball,” which is actually a plastic bag filled with trash.

When the picture first appeared, it got 3,200 hits, with each hit garnering a contribution of 1,000 won. Through these funds, the town in which the boy lives now has a hospital, food and water. The boy in the photo even has a real ball to play with.

The person who took the picture is Park Chan-hak, a professor of photojournalism at Inha University.

In April, Park visited Malawi with Good Neighbors, a global NGO, which was his eighth trip with the group.

“I have a sense of fulfillment whenever my pictures help these children. I think I’m addicted to that feeling,” Park said.

This year, Park has spent over 50 days in neglected areas such as this. He was there when a devastating earthquake hit Haiti and he traveled to poverty stricken towns in Bangladesh and Ethiopia.

“There is a difference in the number of contributions we get, depending on whether there is a picture or not,” said Yoon Bo-ae, a director at Good Neighbors. “So we’re very grateful for the photographers who join us.” 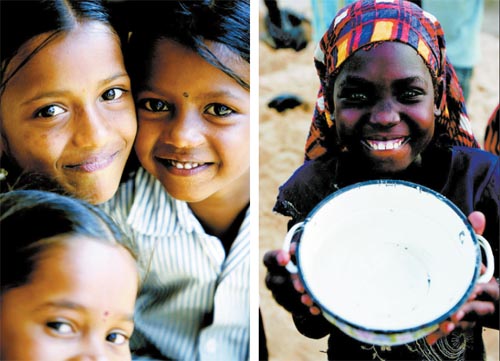 Park Chan-hak’s photographs, such as the two above, have helped many children. By Park Chan-hak


Although it was the NGO that suggested Park join them, it is now Park who calls and asks if there is any work for him to do.

Each of his trips lasts about 10 days, during which he takes around 1,000 shots per day. This tight schedule requires his full attention, so it is almost impossible for him to have a regular job.

He gets no funding for the trips, aside from his airfare, and he receives no income from the NGO. Like the 10 other photographers in Korea doing volunteer work for NGOs, Park is contributing not paper money but his talents to the less fortunate.

Park majored in documentary photography at Kyunghee University. He has worked at Inha University since 2004.

As a photographer, his goal is to shed light on those who are neglected in society. For him, this group includes Korean adoptees, the disabled and others.

Although there are not many people who could easily opt into such a demanding life, Park’s childhood prepared him well for his chosen profession. After his father passed away when he was in elementary school, he led a difficult life and struggled financially. Later, when he was in graduate school, he even had to take time off because he couldn’t pay for his tuition. But the people around him have always offered a helping hand.

When he was in graduate school, he was filming a documentary about an adoptee and the adoptee’s parents offered to help pay Park’s tuition if he agreed to pay for their child’s college tuition fees when the child was grown.

“I wouldn’t be here today if people hadn’t helped me along the way,” Park said. “That is why, if I see someone less fortunate than myself, I feel obliged to help.”

Surprisingly, this good intention has not always been interpreted as such. Park has been criticized for traveling solely to have a broader pool of subjects to draw upon.

Park doesn’t understand the charge. He says he takes the photos to help people.

In Malawi, he met a boy who lost his parents to AIDS and was about to lose his brother to malaria. The boy begged for his brother to be taken into an orphanage.

He says the only thing he could do for the children was to photograph them and hope that someone would see and be moved to help.

“Because of my photos, a contributor stepped up,” Park said. “It only costs 30,000 won to feed one child per month. Now, the boy doesn’t have to send his brother to an orphanage.”

Park says every trip has new meaning and teaches him something new.

“‘Giving’ has become a popular subject in today’s society,” Park said. “It’s not just for special people. Everyone has something to give if they just look around.”