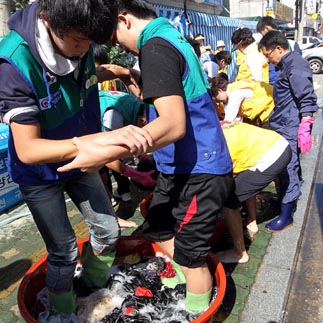 Volunteers from the Red Cross help with laundry yesterday in Sinjeong 1-dong, Seoul, for residents inundated by torrential rain this week. [YONHAP]


With victims of flash flooding during the Chuseok holiday complaining about the local governments’ handling of the crisis, officials and civil servants scurried to hand out financial support to inundated households and businesses.

Local governments of Seoul, Incheon and Gyeonggi have secured relief funds of 11.8 billion won ($10.2 million), using their own budgets and borrowing money from local banks yesterday, as estimates of damages mounted higher. The governments said they will give 1 million won to each family in need.

“It was really hard to arrange money from banks, which closed during the holidays,” said an official for the National Emergency Management Agency.

The governments said they will finish distributing money to all people struggling with flooded homes or businesses after more civil servants return from their hometowns after the Chuseok holiday.

The Seoul Metropolitan Government decided to give to businessmen or merchants who lost properties up to 200 million won in loans per company with interest rates as low as 2 percent.

Residents in Gangseo District and Yangcheon District in western Seoul, the worst hit sites in the metropolitan area, maintained that public servants locked water pump valves that control rain water before the holiday.

“We operated the pumps before rain waters reached our limitation,” an official said. “The reason for the flooding in cities was that the current pumps can handle rainfall of 75 millimeters [3 inches] per hour, but the rain on Tuesday was about 100 millimeters, leading sewage to flow back from the drains.”

The Seoul Metropolitan Government said Thursday that they will adjust the capacity of rainwater pumps to 95 millimeters of precipitation per hour.

The city government also said they will restrict building of basement apartments, where 90 percent of the flood damages occurred.

In Gwangmyeong, Gyeonggi, where 1,100 houses were flooded on Tuesday, the mayor said he will cancel an upcoming athletic competition and use the budget for relief works. “I want to share the pain of people whose houses were damaged by torrential rains,” said Mayor Yang Gi-dae.

The Ministry of Public Administration and Security said yesterday that they will allow people to delay paying local taxes up to one year if they were affected by the flooding.

“We will encourage local governments to give practical help for people in submerged districts,” said Song Yeong-cheol, an official in the local tax department of the ministry.