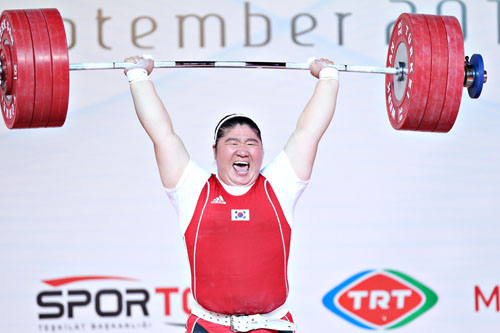 Jang Mi-Ran competes in the women’s 75+ kg weightlifting competition at the World Weightlifting Championships in Antalya on Sept. 25. [Xinhua/YONHAP]

The 27-year-old, who has never placed lower than second in international competition, came up short at the championships, finishing the tournament behind Tatiana Kashirina of Russia and Meng Suping of China, respectively, in the women’s top weight division.

After winning silver at the 2002 Busan Asian Games - her first major competition - Jang took home a silver medal at the 2004 Summer Olympics in Athens before going on to dominate her weight class starting at the 2005 Doha World Championships. She eventually became the first female weightlifter to win four consecutive gold medals at the World Championships. Jang also had a record-setting gold medal performance at the 2008 Beijing Summer Games.

“I failed to win my fifth consecutive world title, but I hope people will not get too disappointed,” Jang said after the competition. “I will train hard and return with strong performances at the Asian Games and international competitions.”

Kashirina set a new world record in the snatch event by lifting 145 kilograms for a total of 315 kilograms, and Meng’s 310 kilograms was good enough for second overall on the day.

Jang will now have to shift her focus to winning her first Asian Games gold medal in Guangzhou, China, in November.

Having suffered several injuries in the past year, Jang was not in top physical shape. She was involved in a minor car accident in January that prevented her from participating in winter training. Although Jang started training in the spring of this year, she suffered a slight back injury just 10 days before leaving for the world championships.

“I was told by those around me that at my current physical shape, I should not compete,” stated Jang. “I was in such bad shape that I’m just glad I was able to compete in the competition safely.”

The 2010 World Championships and next year’s event in Paris, France, will serve as qualifiers for the 2012 London Summer Olympics.

“I was concerned that if I didn’t compete at the world championships, the number of Korean weightlifters invited to London would decrease,” Jang said.