Promoting hanbok as ‘clothes for everyone’

Promoting hanbok as ‘clothes for everyone’ 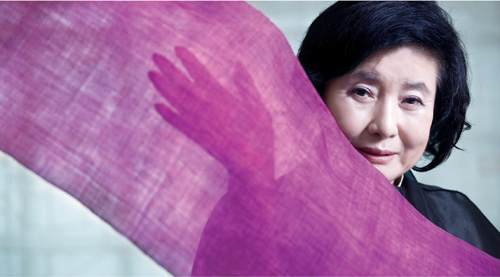 Despite being Korea’s traditional garment, hanbok is rather alien in the everyday lives of most Koreans. Hanbok is often splashed across front pages of local newspapers during traditional holidays such as Chuseok, partly because it is such a novelty, even here.

But it is a different story for Korea’s most acclaimed hanbok designer, Lee Young Hee.

Since introducing hanbok as the “Korean version of kimono” at the Pret-A-Porter Paris in 1993, she has presented traditional Korean clothes at over 400 fashion shows across the globe. In 2004, she established the Lee Young Hee Museum of Korean Culture in New York, and three years later, she donated her designs to the Smithsonian Museum in Washington. She is best known for transforming original hanbok by removing the jeogori (jacket) and embroidering the lapel. 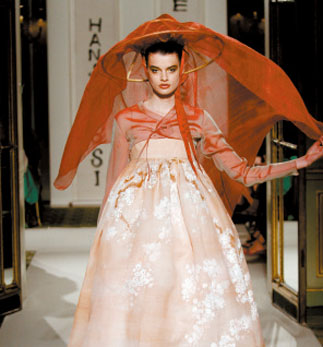 A model walks the runway wearing Lee’s hanbok at an exhibition in Paris. [JoongAng Ilbo]

The JoongAng Ilbo recently caught up with her at the Maison de Lee Young Hee in Sinsa-dong, southern Seoul.

Q. Why did you choose moshi this time?

A. Moshi has been the most interesting material over the course of my life as a designer. It seems to get easily worn out as you wear the material, but when you wash it in water with natural glue and dry it, the clothes become entirely new. It is amazing. I had always wanted to publicize it across the globe and the chance came as Seocheon County in South Chungcheong launched a project to globalize moshi originating from the region. I was selected by the county to design hanbok with moshi in April last year.

Why did you choose haute couture over pret-a-porter on the occasion?

I adhered to the idea of promoting moshi at a haute couture show in Paris since moshi is better suited to be custom-made. I made 36 pieces of clothes with four Oriental themes - pine tree, bamboo, plum blossom and orchid. It took one year for me to prepare for the show. I had to dye individual textile, add embroideries and draw Oriental paintings with a brush. But feedback was so great that I intend to have a show there again next year.

Totally not. Drape moshi clothes around your neck in winter. It is really warm. You shouldn’t consider it a stiff material. When it is mixed with silk or is smoothed with a wooden roller, it gets very silky. Besides, when it is naturally died, it becomes so high quality it is compared with cashmere.

Koreans paid particular attention to your brand when the celebrity couple Jang Dong-gun and Ko So-young bought hanbok from you for their wedding in May.

I had no personal ties with them. They just stepped into my shop. I made hanbok for free for the couple and was paid by their relatives. World-renowned fashion designers such as Miuccia Prada and Giorgio Armani bought my hanbok during their visits to Korea.

(One of her top clientele are Korea’s first ladies. Most hanbok worn by Kim Yoon-ok, the current first lady, are made by Lee.)

You said before you want to propel your hanbok into a globally recognized luxury brand, such as Louis Vuitton. What strategies will be necessary for your dreams to come true?

It is already very obvious, but government support is desperately needed. Supporting fashion shows overseas is good, but it is only a temporary measure. We need a store at the center of fashion cities such as New York and Paris. I wish the government could give financial aid for three years at most.

(The two stores she owned in the respective cities shut down during the financial crisis in the late 1990s, and the Lee Young Hee Museum is being sustained on funds from ethnic Koreans in the U.S.)

What are indispensable design elements for hanbok today?

You are not supposed to emphasize Korean influence too much. It is not easy for foreigners to get accustomed to hanbok fully equipped with dongjeong (thin white cloth-covered paper collar) and goreum (long ribbon-like ties for jackets). You should leave basic design aspects of hanbok such as line and material, but the priority is “something everyone wants to wear” such as Prada and Chanel. I admit hanbok is not the most comfortable clothes, even for Koreans. But it can be reborn into a party dress.