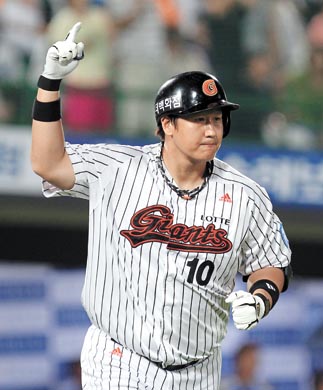 Lee Dae-ho of the Lotte Giants has just wrapped up the most dominating regular-season run for a batter in the history of the KBO.

With the regular season coming to a close Sunday night, Lee finished on top of the league in seven of eight major offensive categories.

He finished with a .364 batting average, 44 home runs and 133 RBI. Lee also led the league in runs, hits, on-base percentage and slugging percentage. The only major offensive category he didn’t dominate? 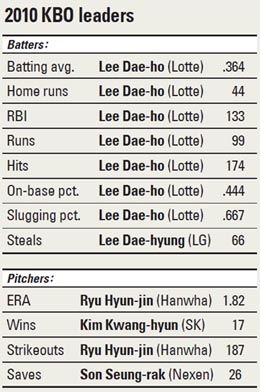 And don’t expect him to any time soon: The burly slugger has managed just seven of them in 10 KBO seasons.

While Lotte’s Lee captured much of the spotlight, a handful of other players excelled this season from a statistical perspective as well.

In terms of steals, Lee Dae-hyung of the LG Twins narrowly edged out Kim Joo-chan of the Giants with 66 to Kim’s 65. Lee Dae-hyung has now topped the league in steals in four consecutive seasons. The players were tied at 65 steals apiece until Lee Dae-hyung managed to get another one in the bottom of the first against the Samsung Lions on Sunday.

“I want to thank my manager and teammates for making this possible,” Lee Dae-hyung said. “The competition with Kim helped me break out of a slump during the middle of the season.”

Hanwha’s Ryu Hyun-jin led the league in ERA (1.82) and strikeouts (187), while Kim Kwang-hyun of the SK Wyverns earned 17 wins to lead the league, narrowly beating Yang Hyun-jong of the Kia Tigers and Ryu, who finished tied for second with 16 wins. Son Seung-rak of Nexen led all closers with 26 saves on the season. Having made his KBO debut with the Hyundai Unicorns in 2005, Son posted an 11-15 record in his first two seasons in the league before spending the next three years away from the KBO because of mandatory military service and injuries. Son made a successful return to the KBO this season with 26 saves in 53 appearances, edging Doosan’s Lee Yong-chan by one save.

While this year’s attendance tops last season’s record by 3,341, it fell short of the goal of 6.5 million fans set by league officials prior to the start of the season.

Busan’s Lotte Giants drew 1.17 million fans, while the two Seoul-based clubs - the LG Twins and Doosan Bears - each attracted more than a million fans this season.