Offense will be key in postseason

Offense will be key in postseason 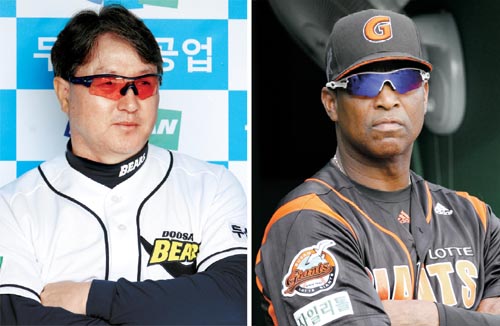 Jerry Royster, right, has led the Lotte Giants to its third consecutive postseason berth, while Kim Kyung-moon and the Doosan Bears hope to get revenge on the SK Wyverns in the playoffs. [JoongAng Ilbo]


With the 2010 KBO regular season in the books, the first round of the postseason will feature the league’s top two offensive teams - the Doosan Bears and Lotte Giants.

With game one of the best-of-five series starting tomorrow night at 6 p.m. in Jamsil, southern Seoul, fourth-seed Lotte boasts the league’s best offense, while third-seed Doosan can match Lotte with its own potent hitters, ranked second in the league.

Hong Sung-heun, Lee Dae-ho and Karim Garcia are at the heart of the order for Lotte, with Lee coming off the most dominating season in the history of the KBO, leading all major offensive categories other than steals. Hong managed to hit a career-best 26 home runs to tie with teammate Garcia for the fourth best total in the league. The trio has hit a combined 96 home runs and 329 RBI this season.

Despite the dominating numbers, the three players are not entering the postseason in their best shape. Lee missed the final two games of the season after spraining his right ankle in their Sept. 19 game against Hanwha. Hong missed a month of the season with a broken bone in his left hand after being hit by a pitch. He returned to action late in the season but finished with a mediocre .222 batting average and three RBI. Garcia was suspended for the final seven games of the season after being tossed from the Sept. 8 game against the Samsung Lions for arguing a call.

Despite the rough finish, Lotte also has Kang Min-ho and Jeon Jun-woo, with 23 and 19 home runs, respectively.

But Doosan also boasts an impressive trio at the heart of their lineup: Kim Hyun-soo, Kim Dong-joo and Choi Jun-seok. The three players have combined for 66 home runs and 238 RBI, but are generally hit for a better average than Lotte’s power-hitting group. The trio played a key role in last year’s first-round playoff series against Lotte, batting .444 with three home runs and 13 RBI. 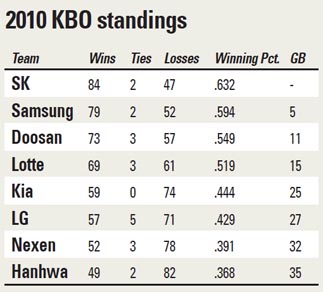 Although Doosan boasts a strong offense, its success against a powerful Lotte batting order will depend largely on its starting rotation. Kelvin Jiminez and Kim Sun-woo combined for 27 wins in the regular season but have struggled down the stretch. Jiminez gave up three runs in 2 2/3 innings on Sept. 22 against SK, and Kim has been hampered by a chronic knee problem of late.

The two teams have no shortage of motivation heading into the series. Doosan is eager to get its revenge on the SK Wyverns after being eliminated by SK in postseason play the past three years. Doosan lost to SK in the Korean Series in 2007 and 2008, then lost to SK again in the second round of postseason play last year.

With the KBO postseason format giving the top two teams byes in the first round, no third- or fourth-seed team has won the Korean Series since 2001. The last team to do so was the Doosan Bears.

The Giants will be seeking revenge against a Doosan squad that eliminated them in the first round last year - Lotte lost the series despite winning the series opener. Lotte advanced to the playoffs for the first time in eight seasons in 2008 and have now qualified in three consecutive seasons. But Lotte manager Jerry Royster is not content.

“Lotte has been successful in the past three seasons,” said Royster, after the Giants secured the fourth and final playoff spot. “I want to face the SK Wyverns.”

In the regular season matchup between the two teams, Lotte holds the edge with a 12-7 record.