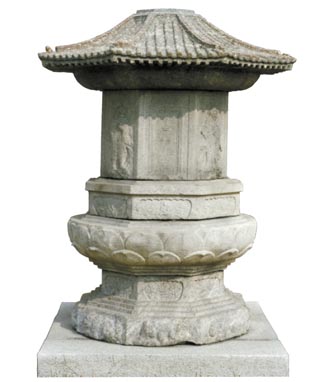 
This stupa is said to be from Heungbeopsa Temple in Gangwon, but that information has not yet been confirmed. It was later moved to various places in Seoul, including Gyeongbok Palace, and is currently housed in the National Museum of Korea.

The stupa was erected in the 6th year of King Munseong, in 844, for Master Yeomgeo, the second patriarch of the Gaji School. The school was one of the nine Seon (Zen) Buddhist schools to emerge in the late Unified Silla period. The stupa is engraved with four devas of Buddhism and has an octagonal top. The lower part of the stone body is shaped like a lotus flower, giving the stupa an elegant look. It is the earliest extant example of an octagonal stupa.