Treasures from another world

Treasures from another world 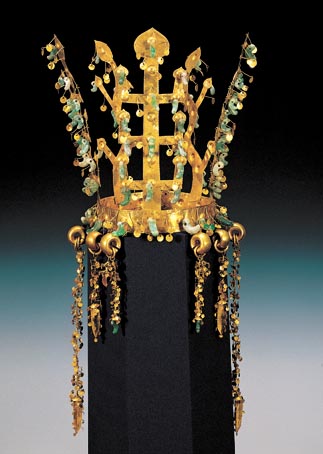 This gold crown was excavated from Hwangnamdaechong and is National Treasure No. 191.

To celebrate its fifth anniversary, the National Museum of Korea is hosting a special exhibition entitled “Golden Splendors: The Royal Tomb of Silla ‘Hwangnamdaechong.’”

The exhibit will display 1,268 relics from the 58,441 artifacts excavated from Hwangnamdaechong, the largest stone tomb from the Silla Dynasty (57 B.C. ? 935). The Cultural Heritage Administration of Korea excavated the artifacts from 1973 to 1975.

Hwangnamdaechong, from which the largest number of Silla-era artifacts have been excavated, is a double mound that looks like a gourd located in Gyeongju, North Gyeongsang. It is presumed to be the burial site for a royal couple, but the identity of those buried within has still not been confirmed. A golden belt found in the northern tomb indicates the identity of this person may have been a woman, but the lack of concrete evidence has led to continued speculation about just who was laid to rest here.

What is known is that Silla was a veritable land of gold. Silla royalty kept the precious metal to attain and hold onto power. As a show of their wealth, they adorned themselves with golden crowns and jewelry, and filled their homes with items cast in gold.

Whenever a ruler died, many of these objects were buried with him as a symbolic gesture of his power. The people of Silla believed that one’s authority did not disappear after death, so it was necessary for the deceased to be buried with objects signifying their power. The burial was also a means through which the power of the deceased was transferred to their descendants. 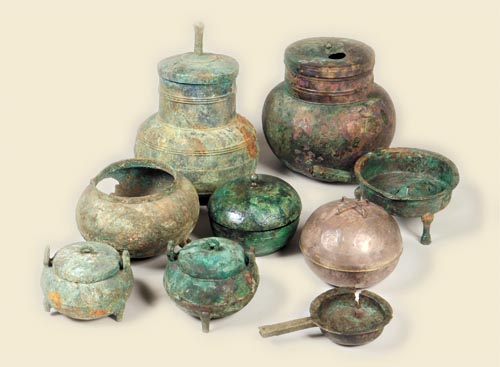 Bronze and silver tableware found in Hwangnamdaechong tomb in Gyeongju, North Gyeongsang. Provided by the National Museum of Korea


The belongings of those found in Hwangnamdaechong are almost all made of gold, and the contents range from jewelry to rice bowls.

The exhibition of these objects, the the largest exhibition of items from a single tomb, will not only expand existing knowledge of the period, it could also help researchers clarify Silla’s relationship with its neighbors. Some of the artifacts in the exhibition are believed to be related to anonymous tombs from the Goguryeo Dynasty (37 B.C.?668) found in Jian, China.

In conjunction with the exhibit, the museum will also hold a series of activities for families, including one on Oct. 2 and Oct. 9 that allows teams to create a miniature tomb within the exhibition hall.