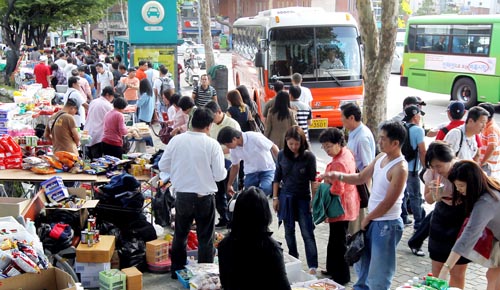 The Filipino market in Hyehwa-dong, Seoul, bustles with people on Sunday. A plan to cut the market in half has drawn praise from residents and objections from marketgoers. By Kim Tae-sung


The Filipino market in Hyehwa-dong is facing a new obstacle in its 15-year history.

Jongno District officials are planning to cut the size of the market in half, following complaints from local residents and overcrowding in the area around the market.

The market has become a popular weekend gathering place in Seoul for expats from various countries, and expats have already raised objections to the plan.

The Filipino market is held every Sunday from 9 a.m. to 5 p.m. in front of Dongsung High School, where vendors sell everything from daily necessities, like shampoo and soap, to specialty comestible ingredients made in the Philippines.

Seoul’s Jongno District Office said yesterday in an interview with the JoongAng Ilbo that the size of the market will soon be cut to half, partially because the stalls interfere with pedestrian and vehicle traffic and also because of complaints from residents nearby.

“We plan to expel unauthorized vendors, but will allow 15 shops that have been in business for the past 15 years to remain,” said Choe Seong-min, the director of the district’s construction management division. “We know the place is a meeting spot for Philippine nationals in Korea, but the stalls cannot be legalized and residents have voiced lots of complaints about the market.”

Recently, the district office had white lines painted on the marketplace grounds to demarcate the stalls, allowing four square meters (43 square feet) for each one.

Vendors who cross the line will face consequences, the district office said.

“District office officials said if we cross the designated line, we will lose some of our merchandise,” said Park Il-sun, the leader of Hanbihoe, an association of Philippine merchants in Korea.

The market sprang up after a Filipino priest began conducting mass in Tagalog - the main spoken language in the Philippines - at Hyewha Cathedral in 1996, drawing a number of foreign nationals to the area. Today, the area is both a market and meeting place for Filipinos, Koreans and other expats.

The market is already half of its original size - it used to be 100 meters (328 feet) long. It will be cut in half again after the district’s plan is implemented.

Many regular marketgoers have expressed dismay about the market’s planned reduction.

“In this market, I can eat dishes from my homeland and meet friends,” said Aristotle Benjamin, a Filipino who lives in Ansan, Gyeonggi.

The market is also frequented by Koreans.

“I often visit this place because I can find the dishes I ate on my trip to the Philippines,” said An Jeong-hee, a Korean graduate school student.

In this sense, visitors have expressed their wish that the market be maintained.

“I visit this market whenever I miss the food from my homeland,” said Vivian Kim, a Filipino who married a Korean man last year. “I will feel lost if the market gets smaller and then disappears.”

Said Park: “I wish the government would designate this area as a multicultural district because over the past few years it has grown into the place for Filipino merchants and expats to meet.”