European chefs impressed by getting a taste of Seoul

European chefs impressed by getting a taste of Seoul 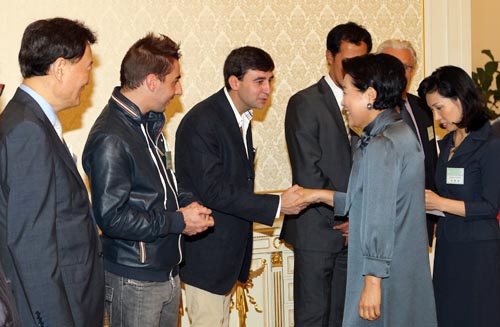 
Can fermented food ever have mass appeal? Which dish has more potential to charm the international crowd - Korean barbecue or kimchi?

Other participants were Lee Charm, head of the Korea Tourism Organization, and food journalists from the Financial Times and El Mundo, Nick Lander and Xavier Agullo, respectively.

“I think Koreans are a bit shy, but you don’t have to be,” said Degeimbre, one of Belgium’s premier chefs. “It’s good to give a bit about your culture, and especially food, to the world.”

Degeimbre, who owns and operates the Michelin star-rated restaurant L’Air du Temps, said he was inspired by seeing how kimchi was fermented and by tasting Korean temple food over the weekend.

Jointly organized by the Seoul Tourism Organization and the Korean Food Foundation, the festival, now in its second year, tries to elevate Korean food to the international stage by inviting world-renowned chefs to Korea to participate in programs, introducing Korean food techniques and ingredients.

The five-day event, running until Thursday, will include a forum titled “Lactic Fermentations and the Biologic Value of Food,” a series of cooking classes and lectures from the seven chefs and gala dinners prepared by the chefs at Seoul’s top hotels.

“We took the chefs out for doenjang jjigae [soybean paste soup] on Sunday and all of them gave us a thumbs-up,” said Samuel Koo, head of the Seoul Tourism Organization. “Through this event, we want to introduce traditional Korean ingredients to these chefs so they maybe use these ingredients and methods back in their countries,”