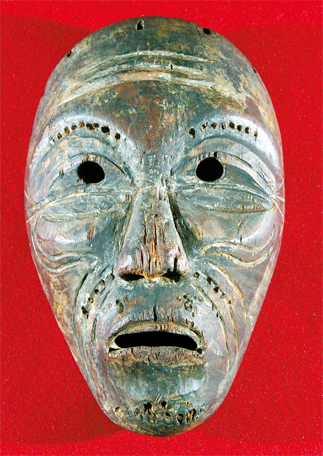 A wooden mask 300 to 400 years old, estimated to be the oldest Hahoe mask in Korea, has been acquired from a Japanese publishing company by the Myungin Museum, which showed it to the JoongAng Ilbo.

“The carving techniques and the feature of the mask matches with the Byeonsan mask [Korea’s 121th National Treasure], and the style indicates it was made before the national treasure,” said Professor Jun Kyung-wook of Korea University.

Hahoe and Byeonsan are villages in Andong, North Gyeongsang, noted for their masks. Korea has preserved 11 masks from Hahoe and two from Byeonsan.

According to research by a Chungbuk National University laboratory that specializes in tree rings, the mask is made from a linden tree. Linden trees were frequently used to make masks, including the Byeonsan mask, because the wood is light and easy to carve.

Most Korean masks are made of paper or a large bowl, which can easily decompose, and were usually burnt after each year’s use.

Hahoe and Byeonsan masks were made out of wood, although not many have survived.

Experts think certain masks survived because they were used only for the annual Hahoe Byeolsin Gut drama and then stored.

Masks in Korea have been used for other rituals and plays. Primitive hunters were also believed to wear masks.

Another Hahoe mask was considered the oldest until the Myungin Museum bought the mask from the Japanese company, but its real age has never been conclusively determined.