Ha could give boost to nat’l basketball team

Ha could give boost to nat’l basketball team 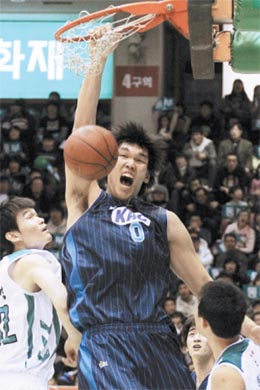 The national basketball team’s front court could get a boost with the addition of center Ha Seung-jin. The 25-year-old center trained with the 2010 Asian Games national team for the first time on Tuesday at the National Training Center in Taeneung, northern Seoul, and he will train with the team until Oct. 27.

Ha had been recovering from a calf injury and missed out on two of the national team’s previous training camp sessions.

“I have a renewed sense of responsibility by merely returning to the National Training Center,” Ha said. “I’ve been hearing a lot about the national team. Having participated in a training session, it was a tense atmosphere, as I had expected.”

Head coach Yoo Jae-hak had selected 12 players for the 2010 Asian Games at the end of its recent training camp in the United States. With the addition of Ha, Yoo will have to ponder his options and drop a player at the end of the current camp.

Listed at 2.21 meters (7 feet 2 inches) and 138 kilograms (304 pounds), Ha can provide the national team’s front court with much needed size and height at the Asian Games. However, Ha is not fully recovered.

“I think it’s the worst injury I’ve suffered so far,” Ha said. “I’m not even at 50 percent at this point but it’s important not to rush it. In the past, I’ve aggravated injuries by pushing myself too hard in haste.”

Despite Ha’s current physical condition, Yoo has been a strong supporter of Ha, saying he will opt to keep Ha if he can provide five minutes off the bench. Against top Asian contenders like China and Iran, Ha’s presence in the paint could provide a big boost for Korea’s front court.

“I need to know exactly what the coach wants out of me,” Ha said. “I think I will be utilized in defensive roles more than on offense. I need to battle other big men and grab rebounds.”

Ha is also one of the few Korean players to have overseas experience. Drafted in the second round of the 2004 NBA Amateur Draft by the Portland Trailblazers, Ha played for three seasons with Portland before spending two more in the NBA Developmental League. He returned to Korea and joined KCC Egis in 2009 and has been one of the most dominant big men in the KBL.

With players like Ham Ji-hoon, last year’s KBL most valuable player, and Lee Seung-joon of Samsung on the roster, critics have said that Ha would not fit in well with the national team. Yoo is pushing to have his team play an up-tempo brand of basketball with full-court pressure defense. So Ha is focused on getting in shape at this point.

“I think we can talk about such matters after the final roster is announced,” said Ha.