Photos both real and surreal in Daegu

Photos both real and surreal in Daegu 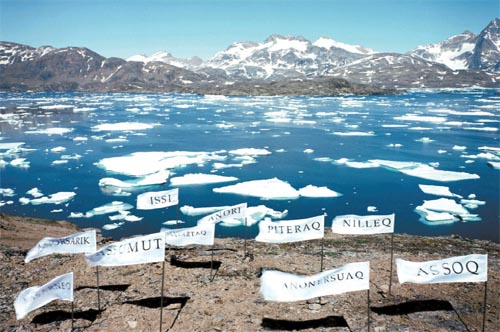 When the Daegu Photo Biennale begins Friday, art lovers in Korea will have four biennales to choose from. The others are Media City Seoul, the Gwangju Biennale and the Busan Biennale - all of which continue through early to mid-November.

The Daegu Biennale will exhibit works by more than 240 artists from 22 countries, most of which are Asian or European. Exhibitions will be held at the Daegu Culture and Arts Center, the Bongsan Cultural Center and other venues in the southeastern city until Oct. 24.

The main exhibition of the biennale has the somewhat abstruse title of “true(E)motion,” but the titles of the subexhibitions are easier to understand: “Seconds of Life,” “Breaking the Edge” and “Helsinki School.”

The “Seconds of Life” show features landscape photos and photos of people in landscapes that “look unfamiliar” because of humans’ intervention into nature, according to the exhibition organizers. 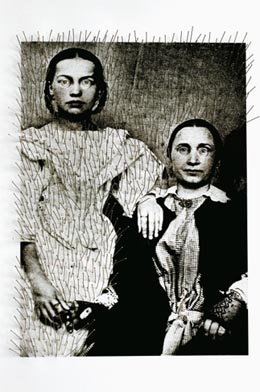 “Language is a Foreign Country 3” (1999), top, by Jorma Puranen, and “Noema” (2010), above, by Ulla Jokisalo, is part of the Helsinki School exhibition in the Daegu Photo Biennale, which starts Friday.

“Such photos tell viewers about the relationship between humans and nature without coming to a conclusion about it,” said Yang Seung-hak, curator of the biennale’s main exhibition.

Some of the exhibits are photos of real scenes, though they look just like surreal paintings. Some of these are staged photos or constructed photos created through the use of traditional or digital manipulation methods.

The “Breaking the Edge” show displays video art made by photographers and the corresponding photos.

One of the video pieces in this section is by Swedish artist Denise Grunstein. It shows strong yet simple images of a series of women whose faces are hidden by their hair.

The “Helsinki School” section exhibits works by the most well-known artists to come out of the school, including Ulla Jokisalo and Jorma Puranen.

The “school” is actually a group of photographers who are students or alumni from the Aalto University School of Art and Design in Helsinki, Finland, the largest art school in Scandinavia. 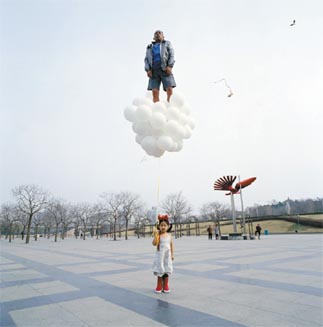 “Balloons 2” (2009) by Li Wei, left, is part of the “Asia Spectrum” exhibition. Provided by the organizers

From Friday to Saturday, local art galleries and publishers will present the portfolios of the emerging photographers they represent in an event called “Portfolio Review.”

Afterward, a panel of judges will announce their best artist selections. The artists will win the right to participate in the next Daegu Photo Biennale. The top artists in that group will also be invited to FotoFest 2012, a biennial exhibition in Houston.

The group of reviewers includes Timothy Persons, director of the professional studies program at the Aalto University School of Art and Design in Helsinki, who will come to Korea for the event. Persons has been a senior lecturer at the university for nearly three decades, helping Helsinki School students grow into internationally known artists. He will give a lecture about the education of photographers at the Daegu Prince Hotel tomorrow.