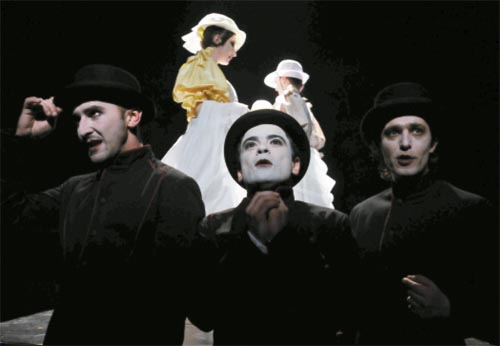 Theatre-Laboratory SFUMATO from Bulgaria, above, is scheduled to present “The Dream of Gogol” Nov. 1 to 3 at the 10th Seoul Performing Arts Festival, which starts next month at venues around the city. Provided by the organizer


As the crisp fall air starts to settle in Seoul, a string of dance and theater festivals are announcing their schedules for the coming season. Three of these - the Theatre Olympics in Seoul, Seoul International Dance Festival and Seoul Performing Arts Festival - are annual events that reflect current trends in the performing arts scene.

Noteworthy performances coming from abroad include “When We Dead Awaken,” from Chorus Repertory Theatre and director Ratan Thiyam, a provocative reimagining of Henrik Ibsen’s famous last work. Another piece from overseas is “Orpheus in the Metro,” a one-man show set against the backdrop of a subway station. It combines the epic Greek myth and short story “Manuscript Found in a Pocket” by writer Julio Cortazar.

From Korea, Nottle Theatre Company’s “Woyzeck” is a movement-theater piece based on the unfinished play by Georg Buchner; the Sanwoollim Theater Company’s celebrated “Waiting for Godot,” which has run for more than 20 years at its home near Hongik University; Theatre Company Michoo’s world premiere of “Below the Equator of Macbeth;” and two pieces by Mokwha Repertory Company: “Dressing Room” and “Chun-pung’s Wife.” Dressing Room explores the structure of Japanese drama while Chun-pung’s Wife is a satirical play that pokes fun at Korean drama. The festival continues through Nov. 7 at various venues including the National Theater of Korea, Myeongdong Art Hall, Namsan Art Center, Daehangno Art Theater and Arko Arts Theater. Call (02) 747-2903 or visit www.theatreolympics.or.kr.

This year’s festival offers 63 performances from 20 countries. In celebration of the 60th anniversary of the establishment of diplomatic relations between Korea and Spain, there will be presentations of a variety of Spanish dance styles from flamenco to modern and including performances by Joaquin Grilo, former choreographer of the National Ballet of Spain.

The opening piece of this series will be performed by DanzAbierta from Cuba, which presents a rich mixture of dance, music, theater and singing. Lebanese artist Omar Rajeh’s “The Assassination of Omar Rajeh” is a timely piece that centers on the significance of the written word in Arab society and the dangers of expressing dissenting opinions.

Portuguese choreographer Vera Mantero applies her highly visceral movement language to the solo “One Mysterious Thing” and Japanese company Pappa Tarahumara brings its layered brand of theatrical dance to bear in a performance that is the culmination of a three-year collaborative exchange with Korean artists called “Swift Project.”

The schedule includes classic works and experimental pieces, including productions of three French comedies by Moliere, “The Storm” from Russia, and “Quixotage,” a famous Polish street drama. The organizers are also presenting “Rhinoceros,” a collaborative work by artists from Korea and France. Other performances include “Showroomdummies” and “Urban Ballet” from France and “Oooo-The Dream of Gogol” from Bulgaria, which celebrates the 200th anniversary of the birth of N.V. Gogol.