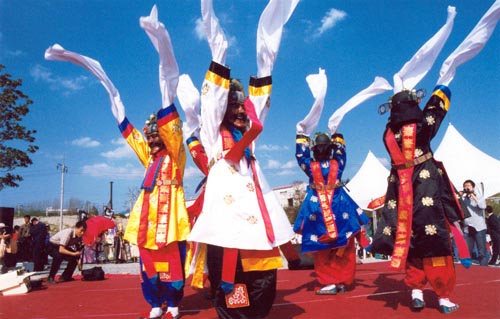 The 44th Cheoyong Cultural Festival celebrates the legend of Cheoyong, the son of the Dragon King, and the ritual court dance that is performed to ward off evil spirits. The festival runs from Oct. 7 to 10. See FESTIVALS, below. Provided by the organizers

Oct. 2: Japanese pianist, composer and arranger Yuhki Kuramoto has long been loved by Korean audiences. His lyrical melodies are played in an easy listening style and the lyrics are reminiscent of a Japanese haiku.

Kuramoto will perform some of his hits, including “I Suppose Flowers Will Fall” and “On a Sentimental Snowy Day.”

To Oct. 30: This festival has established itself as one of Asia’s major opera events since its inception in 2003. This year’s festival includes productions from Korea and abroad and opens with “Faust.” The program also features: “Eugene Onegin,” “The Barber of Seville,” “Andrea Chenier,” “The Merry Wives of Windsor,” “The Marriage of Figaro,” “Simsan Kim Chang-sook” and “La Traviata.”

Oct. 10: Musician Rufus Wainwright is coming to Seoul for the first time to hold a concert. Elton John referred Rufus Wainwright as “the greatest songwriter on the planet,” and the New York Times praised him for his “genuine originality.” Wainwright has established himself as one of the great male vocalists and songwriters of his generation. He has released eight albums so far, and has appeared on numerous soundtracks and compliations, as well as collaborating with artists like Elton John, David Byrne, Rosanne Cash and Keane.

The musician’s concert will consist two parts; first part of the program will be performed as a song cycle with visuals by Douglas Gordon and the second part of the concert will be filled with songs from his previous albums.

October 23: Leading Asian pop stars will gather here in October to lend the city a festive mood ahead of the G-20 summit that will be held for the first time in Asia later this year.

The Asia Song Festival, an annual pop music event hosted by Korea, is set for Oct. 23 this year and all proceeds from the festival will be donated to UNICEF for children in flood-struck Pakistan.

A total of 15 teams from seven countries will participate in the event to be held at the Jamsil Olympic Stadium in southern Seoul. Lee Min-ho, a South Korean actor known for his lead role in the hit drama series “F4,” will also promote the event as its publicity ambassador.

The Asia Song Festival, launched in 2004, is jointly organized this year by the Korea Foundation for International Culture Exchange, the Metropolitan Government of Seoul and the Korean Committee for UNICEF.

The Palace, the Musical

To Oct. 24: Korea’s bestselling comic book, The Palace, with a record of 1.4 million copies sold is being performed as a musical. The original TV drama under the same name also reached a viewing rate of close to 30 percent. The musical is about love and growing up of a girl and a boy of different background and class.

Tomorrow to Nov. 7: This Broadway Musical by the famous American composer Jonathan Larson is going to be performed with Korean casts. Larson has won a Pulitzer and two Tony Awards for his musical Rent. The musical Tick Tick Boom is about an aspiring composer named Jon, who lives in New York City in 1990. The protagonist’s friend wants him to join corporate America, while his girlfriend wants him to move to Cape Cod with her. But he doesn’t want to abandon the musical he’s worked on for the past five years and has not yet given up faith that it will be his big break. The story is autobiographical, as Larson had been trying to establish himself in theater since the early 1980s.

Oct. 7 to 10: Cheoyong is a court ritual dance of Korea performed to ward off evils and to invite good luck. In 2009, this dance was inscribed on the Representative List of the Intangible Cultural Heritage of Humanity by UNESCO. To create opportunities for people to experience Cheoyong dance, Ulsan Metropolitan City, together with Cheoyong Culture Festival Organization Committee organized this festival in 1991.

The festival has invited 52 teams from 17 different countries to perform a total of 64 performances during the four-day festival.

Outdoor performances include, “Cheoyong meets B-boy,” and “Traditional Korean theatrical performance,” along with “Cheoyong mask, Korean and foreign traditional mask exhibition.” Also, the ritual will also be held on the Rock Cheoyong, surrounded by the sea where Koreans believe Cheoyong first appeared from the underwater world. Parade is also included in the festival, which has become the grand event for the people of Ulsan. Mask parade will be held with giant Cheoyong mask and various foreign masks.

This year, Spain will be the festival’s guest of honor.

From Seoul, take a bus or KTX trai to Ulsan.

Oct. 16 to 17: Boseong County has been holding this festival since 1998, as Boseong has been the center or origin of the modern Pansori, traditional Korean narrative singing.

Boseong Sori, or sound was born from the renowned traditional singer, Park Yu-jeon, who is also the founder of the festival, and since then has been known as the number one sori due to the support of King Gojong and his father Daewongun. During the festival, various contests and performances concerning Korean traditional sounds and music will be held along with exhibitions displaying pottery and Pansori related equipments.

From Seoul, take a bus to Boseong Bus Terminal.

To Oct. 7: The Seoul Design Olympiad of 2008 and 2009 has been reborn as the Seoul Design Fair 2010. The design fair will feature an international competition, a variety of special exhibitions and design classes. The Industrial Design Exhibition features design work by more than 200 brands from 20 countries, from jewelry and furniture to exhibition displays.

To Oct. 17: The 2010 Great Baekje World Festival is currently being held around Buyeo and Gongju, under the theme of “700-year dream of the Great Baekje.” The festival is designed to promote Baekje internationally and visitors can stay in the Old Baekje region and have a direct experience of seeing Baekje’s cultural heritage. A total of 22 programs will go on throughout the 30-day long festival. One of the most attractive festivals is “A Day of Sabi Palace,” which includes reenactment of ceremonies in palace such as king’s parade, enthronement ceremony and welcoming party for envoys. Also, “A day in Ungjin Fortress,” event will be offering hands-on cultural experience to learn about Baekje. Various hidden relics of Baekje will also be released to the public. The closing ceremony of the festival will be held on Oct. 17 from 5:30 p.m. to 8 p.m.

From Seoul, take a bus to Gongju or take a KTX train to Daejeon Station.

To Nov. 7: The biannual contemporary art show in the southwestern metropolitan city features photographic, installation and media work by about 120 artists from 31 countries. This year’s theme is “10,000 Lives,” or “Maninbo” in Korean, and is inspired by and named after the epic poem by renowned poet Ko Un.

Tickets range from 2,000 won for children to 14,000 won for adults. From Seoul, take a flight to Gwangju Airport or take a KTX train to Gwangju Station.

To Nov. 17: This showcase is focused on new media art. The 45 participating groups of artists from 21 countries include famous names like the British-American artist Sarah Morris and Thai film director Apichatpong Weerasethakul. Among the Korean artists involved are Cho Duck-hyun, Lim Min-ouk and Noh Sun-tag. This year’s theme is “Trust.” The artworks in the show will tell or ask what trust is, as the expansion of media brings about a distortion of information and the blurring of messages, organizers say.

To Nov. 20: The title of this year’s biennale is “Living in Evolution,” based on the idea that art, in all its various forms, has contributed to the intellectual evolution of the human race. The artistic director is independent Japanese curator Takashi Azumaya. The main exhibition features more than 160 artworks by 72 artists from 23 countries. Exhibition hours are 10 a.m. to 6 p.m.

Oct. 21 to 23 : It’s been the sixth year for Busan to host this fireworks festival but the port city brought new elements to this year’s festival. The city expanded 45-minute show to 60-minute starting this year and the city also said it tried to beef up visuals of the fireworks show with the theme of “Sale for the World.” The show touches upon a story of traveling the world’s seven continents. String events are also hard to miss. The city invites fireworks team from three countries including China, Italy and Portugal. Among the three, China is famous for its decades-long techniques in fireworks show. In addition, pan-Asian actress Choi Ji-woo will have a signing ceremony with fans on October 21 and a concert where Korea’s up-and-coming idol groups on the same day.