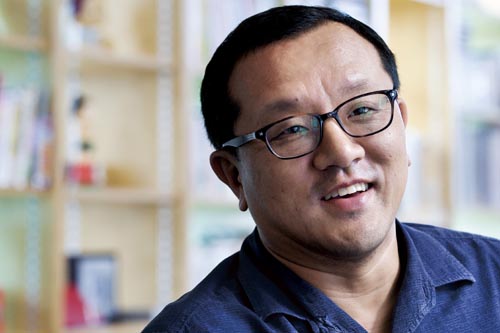 
Sigongsa is a 20-year-old publishing company that first gained fame not for publishing books, but for the fact that it was founded by Chun Jae-guk, the eldest son of former President Chun Doo Hwan. Kim Chong-hyuk, culture and sports editor at the JoongAng Ilbo, met the owner at the Sigongsa building in Paju, Gyeonggi and asked him some questions.


Q.Your company name is Sigong. “Si” meaning time and “gong” meaning space in Korean. Is it true that novelist Lee Byung-ju came up with it?

A. I named the company. I came up with it when I was with my father in Baekdamsa temple in 1989.

I know that you originally wanted to become a soldier.

I wanted to apply for R.O.T.C., but at the time I entered college, my father was serving as president. So it was impossible for me to experience the regular routine of a soldier. But I felt so suffocated being in Seoul as the president’s son.

That’s why I always thought about studying abroad. I later served as a commissioned officer after I got my master’s degree.

How much money did you use to start your publishing company?

I started with 50 million won ($43,554) and two employees. One of them was my college friend who was working at Samsung Electronics at the time. He is now a president of one of the affiliated companies.

What was the most popular book you published?

The Bridges of Madison County. I sold more than a million copies.

Haven’t you published a lot of John Grisham’s books?

Grisham was not famous at first. His first book in Korea was published by another company and it decided not to publish a second book by him. So we got the deal and it was a big hit. Each John Grisham book has sold 100,000 to 200,000 copies. At the time, selling a thousand copies of a book was seen as successful. So that put us on the map. The Grisham books have been a great help.

Who decides what books to publish?

But I was wrong and I learned a very expensive lesson. In the process, I thought marketing plays a big role in making a bestseller. Then I soon figured that publishing companies do not last long, even if they have one or two bestsellers.

So I decided to go with steady sellers. That’s when I came up with the idea to publish children’s books. Two-thirds of our sales are children’s books. It was easy for me to decide what books children would like when I was raising my own children. But now younger employees make the decisions because my children are all grown up.

Do you have any publishing philosophy?

Frankly speaking, publishing is losing its influence. However, instead of printed books, electronic books are on the rise. Since a publishing company cannot create the content itself, it is important to have a creative mind network to survive in this industry.

Tell me more about that.

Is the era of printed books over?

It will exist with my generation. But the next generation will depart from print.

How do you learn about new trends?

What type of successful books have been written by bloggers?

Practical books, such as on cooking and interior design because these bloggers have popular followings.

What lessons do you try to teach your children?

How does it feel to be the son of a former president?

I often wished that my father had not been president. If he hadn’t been president, I would have been able to live a different life. I felt like I was waiting for a great storm to pass.

Is it that hard to live as a son of a president?

Absolutely. I thought I didn’t need to move into the Blue House. It was hard to go on a date with a girl since the bodyguards would follow me everywhere all the time. I tried to give them the slip, but I ended up with more bodyguards following me.

The Blue House is just too big for one family to live in. We even used an intercom to talk to each other at home. I expected my life to get better after he ended his term but it was not that simple.

What does it mean to have power?

It is a very interesting question. I was just a resident in the Blue House. I was never in a position to exercise power, but I always thought “why would people want to come here? It is not happy or pleasant to live in this place.”

I felt happier when our family got together around the dining table at our old place.

Have your siblings had a hard time as well?

I didn’t want them to become accustomed to life in the Blue House since you don’t do anything on your own and depend on drivers and secretaries. The youngest one was in elementary school at the time and I felt bad for him not being able to bring his friends home.

I wished my siblings would be able to live a normal life with normal jobs. However, living a normal life is extremely hard if your father is famous.