Behind-the-throne patrons are all kin

Behind-the-throne patrons are all kin 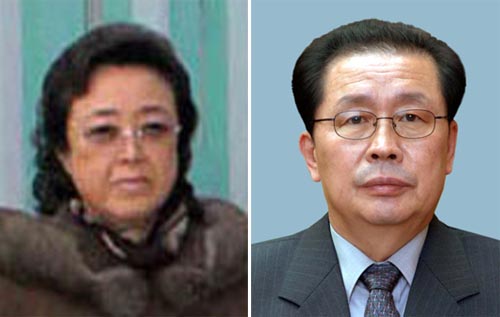 
North Korean leader Kim Jong-il’s determination to rely on his younger sister and brother-in-law to protect his young heir apparent became clearer yesterday as the couple has gained key military and party posts in a rare reshuffle of the power elite.

Kim’s sister Kyong-hui, a director at the ruling Workers’ Party, was given the position of four-star general yesterday, the first female to get such a high military post in the North. The appointment came after her husband Jang Song-thaek, director of administration at the party, was promoted to vice chairman of the National Defense Commission in June. Kim and Jang were both born in 1946.

Family ties will be how Kim is protecting his plan for a third-generation dynastic power succession as his health deteriorates, observers in the South said. Kim Jong-il, born in 1942, has maintained the positions of supreme commander of the North’s military and chairman of the National Defense Commission since his father and North Korea’s founder Kim Il Sung died in 1994.

The North Korean leader is known to have a special affection for his younger sister. Since their mother died when Kim was seven, he took care of Kyong-hui throughout her childhood and she also respected her brother very much, said sources well-informed about the family. Their father, Kim Il Sung, had disapproved of his daughter’s marriage with Jang, but Kim Jong-il personally backed the couple’s marriage, the sources said.

According to the sources, Kim Kyong-hui has a heart condition and the couple had one child, Jang Kum-song, who reportedly killed herself in France in 2006. Although Kim Kyong-hui has kept a title at the Workers’ Party, she has rarely been active. She was photographed once with Kim Jong-il in 1994 at the funeral of their father. In June 2009, her public appearances abruptly accelerated.

Since then, Kim Kyong-hui and Jang have followed Kim Jong-il like shadows. She joined the North Korean leader’s public outings 72 times this year and Jang joined the leader 71 times.

Jang’s path to the power has been rough. When Kim Jong-il was rising as heir apparent in the 1970s and ’80s, Jang assisted him as his right-hand man. In 2004, he faced a purge, but recently made a stunning political comeback.

After completing his university education in the North in 1969, Jang studied in Moscow for three years. He married Kim Kyong-hui in 1972.

Jang visited South Korea in 2002 as a member of the North’s economic delegation, touring Seoul, Gyeongju and Jeju. But he was removed from official posts in 2004 after being accused of involvement in a massive graft and power-abuse scandal.

He went through two years of “revolutionization” - being purged from ruling circles - but returned to politics in 2006 when he was appointed director of the capital construction committee. One year later, he joined the inner circle of the Workers’ Party by rising to the post of director of the administration department.

Intelligence sources said Jang has been acting as the kingmaker since Kim’s stroke in 2008. Grooming Kim’s successor and administering the North’s internal affairs have been Jang’s duties, they said.