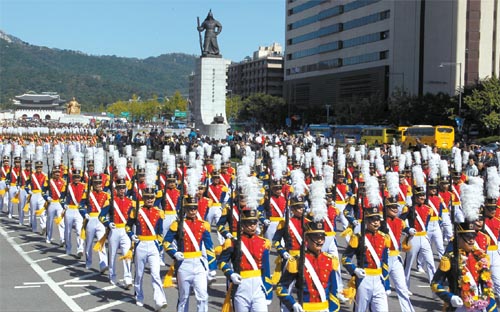 South Korean honor guards holding squad flags march during a parade at Gyeongbok Palace yesterday commemorating the 60th anniversary of the recovery of the capital Seoul in 1950 during the 1950-53 Korean War. The anniversary was also held also to commemorate Korea’s Armed Forces Day. [YONHAP]


President Lee Myung-bak said yesterday that the Cheonan’s sinking in March should serve as a wake-up call for the nation’s military to drastically reform itself.

“We have to find out what we lack and what our problems are,” Lee said in a speech televised nationwide yesterday. “We then must carry out a bold reform and make a new turning point for Korea’s military.”

Lee addressed diplomats, government delegates and war veterans from around the world in a ceremony in central Seoul to mark the 60th anniversary of UN allied forces reclaiming the capital city from North Korea during the Korean War.

The ceremony also celebrated the founding anniversary of the South’s military, which falls on Friday.

Stressing the need for a true military spirit, Lee said the armed forces must focus on their basic duty of defending the nation’s security.

“North Korea’s latest provocation, which killed our 46 sailors, provided a painful lesson about the reality of our security situation,” Lee said. “As the cease-fire has continued for 60 years, military discipline has slackened.”

While the South’s troops are armed with superior weapons and trained with operational plans, they have failed to act speedily and systemically in an emergency, Lee said. He said he intended to reform the national defense system and military culture.

“The military should be a place which youngsters willingly join,” Lee said.