Man without a face or birthday

Man without a face or birthday

Little is known about Kim Jong-un, even in North Korea, because the youngest child of North Korean leader Kim Jong-il has been secretly groomed to become the next leader of the reclusive communist regime.

The only available photo of Jong-un is an undated image from his teenage years. His exact age is unclear. Intelligence sources say he was born on Jan. 8, 1984, but North Korean authorities are trying to convince the public that he was born in 1982 because it echoes the official birth years of his father and grandfather, North Korean founder Kim Il Sung.

Officially, Kim Il Sung was born in 1912. Kim Jong-il was actually born in the former Soviet Union in 1941, but officially he was born in 1942 on Mount Paektu, the mystical place of origin for the Korean race.

Kim Jong-un is the youngest of three children Kim Jong-il had with third wife Ko Young-hee. A dancer of Korean descent from Japan, Ko was known to be the favorite consort of the North Korean leader. She died of cancer in 2004. 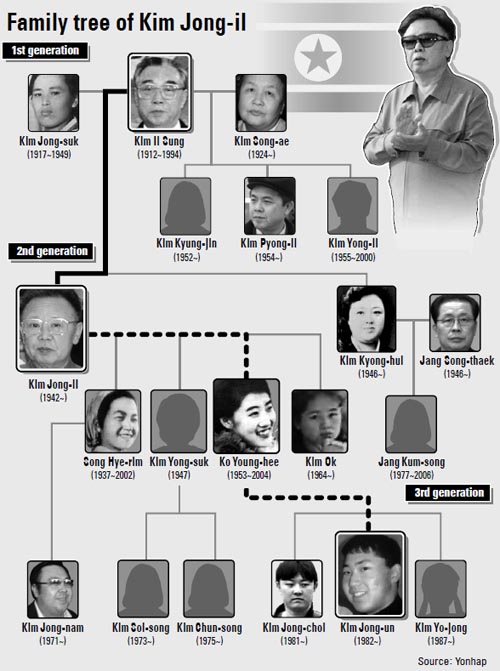 The North Korean leader has another son, 39-year-old Jong-nam, with another wife, Song Hye-rim, a former actress who died in exile in Moscow in 2002 at the age of 65.

According to South Korean intelligence sources, Jong-un and his siblings attended the International School of Berne in Switzerland in the 1990s. After returning to Pyongyang, Jong-un studied at the Kim Il Sung National War College from 2002 to 2007.

“Because Kim Jong-il wanted to build his son’s military career, Jong-un was enrolled at the military academy at an early age,” said a government official. Sources say he didn’t actually attend the academy: professors privately taught him at home.

Kim Jong-il has promoted a “military first” policy to rule the nation and control the powerful armed forces.

The unprecedented third-generation dynastic succession in a communist state has been rocky. Jong-nam, the North Korean leader’s eldest son, lost his chance to become heir apparent after his failed attempt in May 2001 to enter Japan with a forged passport, allegedly to visit Tokyo Disneyland. Ever since, he has largely lived outside North Korea, mainly in Macau.

Jong-un’s older full brother, Jong-chol, was once discussed as a possible successor, when North Korea began a personality cult around Ko, his mother and Kim Jong-il’s third wife. Jong-chol’s chance, however, faltered after Japanese media reported that he took a trip to Europe with a female companion and attended an Eric Clapton concert in Germany. After Ko died in France in 2004, Jong-chol’s position was weakened. It was also reported that Kim Jong-il considered him to be too effeminate.

Jong-un started a rapid climb after Kim Jong-il suffered a stroke in the summer of 2008. After his recovery in November, the North Korean leader stepped up the campaign to anoint Jong-un as his successor. A song praising the youngest son was created, and the North Korean public underwent lectures about Jong-un’s abilities.

He was also helped by his guardian, Jang Song-thaek, husband of Kim Jong-il’s sister.

During the peak of Ko’s personality cult, Jang saw his political fortunes plummet and was purged temporarily. But after rival Ri Je-gang’s death in June, Jang returned to the inner circle and was named the Workers’ Party’s Director of Administration in 2007. Jong-un’s political stocks rose with Jang’s.

Last year, North Korean authorities began a personality cult around Jong-un to tout his abilities to the public, a sign that he was being groomed as his father’s successor. According to South Korean intelligence sources, Pyongyang started publicizing the fact that of all the Dear Leader’s children, Jong-un resembled his father most physically and in terms of personality.

It took less than two years for Jong-un to be named yesterday a general of the Korean People’s Army at the biggest political conclave in the North in 44 years.

Believed to be about 175 centimeters (5 feet 9 inches) tall and to weigh 90 kilograms (198 pounds), Jong-un is known to enjoy basketball with his elder brother and professional players. In contrast to his brother, Jong-un was remembered as a boy with strong organizational skills and a desire to win.

“Jong-chol just shook his hands with other players and parted with them after a basketball game, but Jong-un summoned his team and analyzed the reason of defeat,” recalled Kenji Fujimoto, Kim Jong-il’s former private Japanese chef, in a book describing his 13 years in Pyongyang.

The North’s decision to groom Jong-un as future leader was first revealed by South Korean intelligence authorities in June 2009. A senior official from the National Intelligence Service in charge of North Korea affairs briefed lawmakers on the National Assembly’s Intelligence Committee that North Korea had informed its missions abroad of Jong-un’s selection as the heir apparent.

A diplomatic source also disclosed that Jong-un was elected a lawmaker for electoral district 216 at an election for the Supreme People’s Assembly in March last year. The district’s number matches Kim Jong-il’s official birthday, which is Feb. 16.

North Korea, however, denied speculations about the third-generation dynastic succession. Kim Yong-nam, chairman of the Presidium of the Supreme People’s Assembly and the nominal head of the state, said last October at a press conference with foreign media that no discussion was ongoing in the North at the time about a power succession.