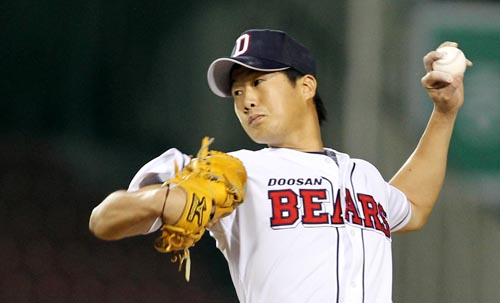 
It’s the goal of every professional athlete to compete in postseason play. A strong desire to battle for a shot at a championship after a lengthy regular season is the same for everyone from rookies to aging veterans.

There is perhaps no one happier to be competing in the playoffs this year than Doosan’s left-handed relief pitcher Kim Chang-hoon. The 25-year-old broke into the KBO with the Hanwha Eagles in 2004 but is competing in his first postseason against the Lotte Giants in a best-of-five first round series.

“It all feels like a dream,” Kim said. “Everything seemed hopeless at one point in my career but I have a feeling everything will work out O.K. from this point on.”

Drafted first overall out of Cheonan Bugil High School, Kim signed a lucrative contract worth 420 million won ($366,660) but struggled out of the gate. Kim went on to post a 2-3 record with a 7.17 ERA in his rookie season. Things started to spiral downhill from there.

Young professional athletes often worry about the sophomore jinx but Kim had a disastrous sophomore campaign in which he tried to pitch through shoulder pain and ended up tearing a ligament in his throwing elbow in the second game of the season.

After a successful operation to repair the torn ligament, he returned to the Eagles after a year of successful rehab but tore a ligament in the same elbow on the first pitch of his first game back.

Kim underwent another surgery, which doctors told him could potentially end his career as a pitcher. Around the time he started his second rehabilitation program in early 2007, he was dealt another tough blow - his mother died after a long battle with cancer. Physically and mentally drained, Kim decided to do his mandatory military service.

Self-doubt tends to wreak havoc on the psyche of athletes recovering from major injuries. Kim was not immune from such tendencies and wanted to quit baseball. However, he was able to make a determined effort to return to the KBO at the strong urging and support of his father, Kim Ki-sung. The elder Kim told his son that he would have regrets if he stepped away from the game he loved. So he urged his son to make a concerted effort to rehab the elbow for two years and to make his decision after that.

The elder Kim quit his job as publisher of a regional branch of a newspaper company and dedicated his time to studying physiotherapy to help his son recover from his injury. In time, the elder Kim even earned a personal-trainer certificate. Their small apartment began to fill with electrotherapy and other physiotherapy equipment. He also treated his son with acupuncture and any home remedy that could bring results.

After two years of such strenuous rehab with his father, Kim was able to pitch and regain some velocity. He was traded to Doosan and returned to action this year. Although his fastball, which once clocked in at 150 kilometers per hour (93 miles per hour), is now down to 130 kph, his father assured him the velocity on his pitches would pick up again over time.

In May this year, Kim decided to let go of his fear of reinjuring his left elbow and tossed the ball as hard as he could. He saw an improvement of 7 kph on his fastball.

Freed from his fears, Kim saw rapid improvement in his game.

Despite seeing limited action as a relief pitcher - Kim didn’t earn any decisions, but has eight strikeouts and a 3.52 ERA in nine appearances - Doosan’s manager Kim Kyung-moon made a surprise choice by including him on the postseason roster.