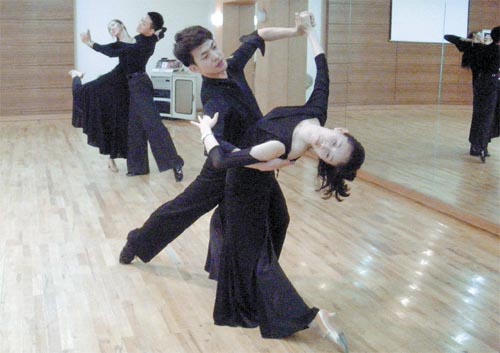 
At a studio in northern Seoul, Hwang Sun-woo was telling paired dancers to move, twirl and dip and to not forget grace, as the music changed every two minutes.

Hwang is the coach of Korea’s national standard dancing team, which will head to the Asian Games in November in Guangzhou, China, to hunt for medals in a sport that has been frowned upon in the country.

“But I’m doing my best for my first Asian Games.”

DanceSport obtained the status of an official program for the first time at the Guangzhou Asiad. The competition is no laughing matter, considering 12 medals are at stake.

But DanceSport never had much of a chance in Korea. Social dance and ballroom dance were illegal under decades of military dictatorships, which considered them “harmful to the fine customs of the society.” Professional dancers were looked down upon as frivolous and even obscene for their close physical contact in public between men and women.

“My father had never acknowledged my dancing,” said Jo Sang-hyo, who will compete in the waltz and five-dance segments at the upcoming Asiad. “He has never come to a competition to see me, and he never told anybody about me and what I do.”

The dancers accept the Asiad status as a certificate of athleticism.

“It makes me emotional when I look back on the past. When I started dancing some 20 years ago, we had to dance in secret. Police had clamped down on dancing. We had no future,” Hwang, the coach, said.

Experts say the sport has long been misinterpreted.

“For dancesport, you need basic dancing skills, flexibility of the body, power, agility, good reflexes and choreography. It deserves to be a professional sporting event,” said Kim Kyung-hee, director from the Korean Federation of DanceSport.

Kim Do-hyeon said his exercise routine is just about the same as other athletes.

“I work out to improve strength, fitness and endurance through weight training like other athletes do,” he said.

Of the 12 medals that are up for grabs at the Asiad, six are in standard dancing and six others are in Latin dancing.

Korea, which has six couples in its squad, is one of the favorites for gold at Guangzhou, having earned one gold, four silvers and four bronzes at the East Asian Games last year in Hong Kong.

“Our players are upbeat about competing at the Asian Games,” said Lee Hae-dong, coach of the squad’s Latin dancing team. “Now we are athletes. We are still frequently called entertainers or artists, but now we are athletes.”

“I am looking forward to the Asian Games,” team captain Nam said. “What would it be like when I walk through the main stadium in the opening ceremony, wearing the national uniform and waving the national flag?”

Kim, who will compete in the cha cha cha and jive, said making the national team has been his dream.

“I can’t sleep at night just thinking about it,” he said.

Athletes say they have long felt the difference between being a dancer and being an athlete in Korea.

“When I first went to the national training center, I saw swimmer Park Tae-hwan. I was so amazed to see him in front of me even though I’m a national team athlete like him,” Jo said.

But things have changed, he said, including his father.