Actress steps out of character

Actress steps out of character 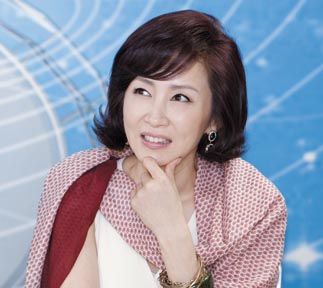 It is hard to categorize the 45-year-old Jun In-hwa.

As an actress, she has played a wide variety of characters, from the late former first lady Yuk Young-soo in the MBC drama “4th Republic” (1995-96) to the villain Chang Hee-bin in MBC’s “The 500 Year Joseon Dynasty Queen Inhyun” (1988).

Throughout her career, she has earned critical acclaim for her versatility as an actress.

This year, she once again demonstrated her ability to step out of character to play a cold and calculating character on the popular TV drama “The King of Baking: Kim Tak-goo.”

In the drama, she plays Seo In-sook, a wealthy and charismatic woman who tries to destroy her son’s rival Kim Tak-goo.

On the day of our interview, she was in her dressing room and just finishing off a lunch of seaweed rolls and dumplings prior to her appearance on a popular KBS talk show.

Colorful necklaces and bracelets were spread over the dressing table like a jeweler’s display counter.

Her stylist said that the bracelet she was planning to wear was valued at 40,000,000 won ($35,027). She added that such extravagance was uncustomary for the actress, but that she was dressing that way as a tribute to her role in The King of Baking: Kim Tak-goo, which gained an audience share of more than 50 percent at its height.

For our interview, Jun was dressed in a more modest mustard-colored knit top, white cotton pants and sandals.


Q. In the final episode of The King of Baking: Kim Tak-goo, your character is the last villain remaining after all the other characters triumph. How did you feel about that?

A. That’s In-sook. If she had become something different at the end, she would just have been mean - not evil to the core as she is. She’s proud and keeps her soul closed. The background music from Episode 29, “No, I do regret nothing” [Non, je ne regrette rien], illustrates this well. What fun would it be if there were only young, handsome male characters like Tak-goo [Yoon Si-yoon]?

But I also feel sympathy for In-sook. Her life as an independent and powerful woman dealing with upper class parents-in-law in the 70s and 80s is difficult. I also feel bad because she is so lonely.

What was the relationship between veteran actors like yourself and the younger actors in the cast?

Younger actors can play their roles more easily when veteran actors lead with powerful performances, so we veterans often feel a sense of responsibility. Si-yoon and Yong-a [Yang Mi-soon] and Yu-jin [Shin Yu-kyung] are all adorable and laudable, but Joo Won, who plays my son, Ma-joon, was especially great to work with. He has a good attitude and he has grown a great deal as an actor.

You have such calm and ladylike public persona, but at the same time you play such vicious characters.

As I get older, I find I’ve become more attracted to complex characters. I first discovered that side of myself when I played Empress Moonjung from “Women’s World” (2001-02).

As an actress, taking only glamorous and beautiful roles will be detrimental to my career. I want to try something new. When I was younger, I would never do movies because many of them required nudity of the actresses. But now there are a variety of roles for women.

From your elegant Jackie O. look in early episodes to the high fashion you modeled in the later ones, your character was a style icon. The clothes she wore were extremely popular after each episode and sold well in boutiques. Did you know your looks and bold style were the talk of the town?

Looks? No way. When I was younger, I used to feel competitive with other actresses, but now I really think I’m in my prime. [Laughs.] I couldn’t accept my flaws before but now I think I’ve become more well-rounded. I’ve learned that pretty facial features are not really important - and they don’t last forever. Now, I think charm is more important than having a perfect appearance.

How do you maintain your look?

Wearing gorgeous clothes and doing things you like is a good start. When I’m not working, I have to be myself. That’s how I’ve survived for 25 years in the business. [Jun made her debut in 1985.] I also have to take care of myself. I’ve worked out every day for the last year.

How do you balance work and family? [Jun has been married to Yoo Dong-keun since 1989; together they have a daughter and son.]

How all people live is similar if you look below the surface. It can be tedious to live with the same man for more than 20 years, and my husband probably feels the same way about me. But he is the person who will be there for me and I trust him. That’s important.

My family also understands that I don’t have much time while in production but as soon as work ends I’ll be back to my kids.

I’m no different from anyone else. I just want to be a good mother to my children.

I’m also excited to work with clay again. [Jun is a skilled potter and is said to be on the same level as a professional.]

As they say, life is for living, happy or sad. As the line from the drama goes: It’s like a flower blooming on the wild grass.