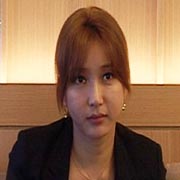 Lyricist Choi Hee-jin has taken legal action against netizens who have posted malicious comments on her Cyworld page.

Choi, who once dated singer Eru, has been entangled in a war of words with Eru’s father Tae Jin-ah.

Earlier this month, she accused Tae of trying to break up her relationship with the singer, among other things. After she later admitted that the accusations were false, her Cyworld page filled with negative comments about her.

She posted on Sept. 23 a note that she would take legal action against anyone posting remarks against her. The note was confirmed on Wednesday by the Bangbae Police Station in a report by the online newspaper Newsen.

The exact number of people being charged was not revealed.

Since then, the lyricist has continued her brawl with netizens. One post on her Cyworld page said: “I have caught those who posted malicious comments about me, now it’s time to catch more of these bug-like netizens.”

Choi has also generated controversy in recent days for posting provocative pictures of herself and a dragon tattoo on her back.