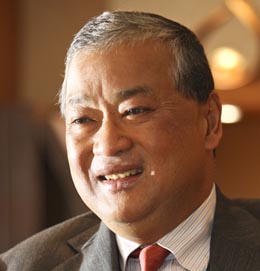 Bangkok Mayor Sukhumbhand Paribatra, who visited Seoul for the Seoul Forum for International Affairs, said in an interview with JoongAng Ilbo yesterday that he sees China’s emergence as a new economic power in the Asian region an “opportunity,” not a grave threat for Southeast Asian nations, including his homeland, Thailand.

When asked which country in the Asean countries is a major counter-player against China, Sukhumbhand, who served as deputy foreign minister for five years in the 1990s, said, “We can’t bring any one country to counter China, not even the U.S.,” because the U.S. has an interest in investing in China even though there are conflicts in the bilateral relations.

“All of us in Southeast Asia are aware that China is rapidly rising and, of course, there are concerns,” Sukhumbhand said.

“What all of us in the Asean countries have been trying to do over the last two decades is to promote balance among the big powers in the region. These concerns are very limited. We see, one way or another, that the rise of China is an opportunity rather than a threat.”

Sukhumbhand pointed to China’s “soft diplomacy” as the reason why Asean countries, including Thailand don’t see China as a threat. He added that even Japan sees the rise of China as an opportunity because of immense economic benefits of investments by China.

“China has been using ‘soft diplomacy,’ not ‘hard diplomacy,’ which fosters culture, trade and investment exchanges to increase influence in the region,” Sukhumbhand said.

Sukhumbhand also noted Korea’s hosting of the G-20 Summit in November and he emphasized that Thailand and other Asean countries want to follow in Korea’s footsteps to become economic powers in the future. But for that to happen, there must be a condition: Korea and Asean countries must shape a closer relationship, particularly in scientific technology cooperation.

“In Thailand, there are 20,000 Korean businessmen living and working in that country, mostly in Bangkok, and that’s a symbol of the close relationship between Korea and Thailand,” Sukhumbhand said, adding that the two sides must solve the imbalance of trade.

In terms of the stability of the current situation in Thailand due to the ouster of Prime Minister Thaksin Shinawatra four years ago, Sukhumbhand said, “the situation is normal now.”

“In a recent opinion poll,” Sukhumbhand said, “50.2 percent of the people were in support of the ruling party. The current government sees Thakshin as being part of a problem but other people also think Thaksin must be a part of a solution. If we want to solve the problem, Thaksin must be involved.”