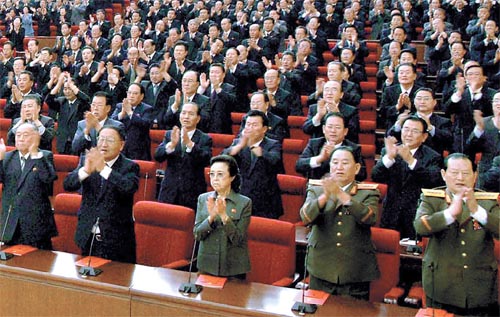 Kim Kyong-hui, third from right in the front row, and delegates clap in unison during the meeting. Kim’s younger sister retained her position as a department director on the Central Committee and gained a new post as a member of the Politburo. [AP/YONHAP]


A day after being made a four-star general, the North Korean leader’s son Kim Jong-un was appointed to relatively high positions within the Workers’ Party at a one-day convention on Tuesday.

North Korea’s state-run media said early yesterday that Jong-un was appointed a vice chairman of the Central Military Commission and a member of the Central Committee, both within the Workers’ Party.

Leader Kim Jong-il was reappointed chairman of the Central Military Commission. The Korea Central News Agency said yesterday that Kim had been present at the Workers’ Party meeting, the first in 44 years, but didn’t say whether Jong-un attended. Pictures released by the news agency showed the father in attendance but not the son.

As was expected, Jong-un received high-ranking party posts, reinforcing speculation that he is being groomed to succeed his father. However, experts said Jong-un’s new positions don’t guarantee him the leadership yet. Jong-un was not given a position on the National Defense Commission, the highest body in the North’s military, which Kim Jong-il currently heads. The National Defense Commission is separate from the Workers’ Party.

“Kim Jong-il has now opened an umbrella in the rain for his son Jong-un,” said Cho Sung-yeal of the Institute for National Security Strategy.

Another expert who asked for anonymity said Jong-un is “halfway there” and that he would have to fight in order to successfully secure his father’s position.

Ri Yong-ho, 68, who was promoted to vice marshal of the Korean People’s Army on Monday, was appointed as another vice chairman of the Central Military Commission Tuesday, holding equal rank as Jong-un. The positions are thought to be newly created for Jong-un and Ri. The double appointment is thought to be a way of giving power to the Dear Leader’s son but to also have an experienced person at his side, as Jong-un has virtually no military experience. Ri, chief of the general staff of the Korean People’s Army, was also elevated to the party’s Political Bureau (Politburo) at the meeting.

Another significant development during the convention was the bulking up of the Party’s Central Military Commission, which has been expanded from six to 19 members, including Chairman Kim Jong-il and the two newly appointed vice chairmen. Among the other 16 are Jang Song-thaek, husband of Kim Jong-il’s sister who is referred to as the second-most powerful man in North Korea. Jang, who is vice chairman of the National Defense Commission, was also named an alternate member of the Politburo.

“In socialism, the party always comes first but now what we see is that the military formation within the party has gained strength,” said Cho of the Institute for National Security Strategy.

Ha Tae-kyung, president of Open Radio for North Korea, said the image of a “military party” had been reinforced with the moves.

Kim Jong-il’s sister Kim Kyong-hui was also named as a member of the Politburo, after she also received a four-star general position earlier on Tuesday.

The Politburo was expanded from 10 to 37 positions, while the Secretariat grew from 5 to 11 and the Central Inspection Committee increased from 8 to 17. The Control Commission saw no change in its number of members, which is 7.

KCNA also reported yesterday the Workers’ Party issued a resolution to revise the party’s charter. During a landmark summit between the two Koreas in 2000, former South Korean President Kim Dae-jung requested Kim Jong-il to revise his constitution, and the North Korean leader said it would be done during the next party congress.

“The Conference decided to adopt the proposal for revising the party rules as the rules of the Workers’ Party, convinced that the proposal will provide a sure guarantee for strengthening and developing the party into an eternal glorious party of Comrade Kim Il Sung and victoriously advancing the revolutionary cause of Juche, the cause of building a thriving socialist nation by more thoroughly ensuring the unitary leadership of Kim Jong-il over the whole party and society,” said the KCNA.

The revision deleted the phrase “to establish a Communist society” from the Party’s final aims for the Korean Peninsula, but left its intentions of being hostile to South Korea intact.

The South Korean government had no official statement about the Workers’ Party meeting yesterday.

Meanwhile, Chinese President Hu Jintao lauded Kim Jong-il for being re-elected as general secretary of the party yesterday, according to a Xinhua report, and extended “warm congratulations.”