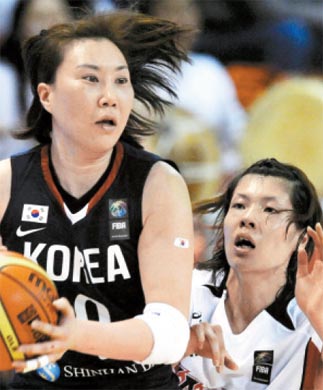 
The women’s national basketball team managed to sneak into the quarterfinals at the 2010 FIBA World Championship for Women, but they face the daunting task of facing the United States today.

In advancing out of the group stage for the first time since the 2002 World Championship in China, Korea’s head coach Lim Dal-shik and his team have already achieved their goal of reaching the quarterfinals.

Korea finished a disappointing 13th overall at the 2006 event in Brazil. It remains to be seen if Korea can pull off an upset against the Americans, but that seems highly unlikely.

As the top-ranked team in the world, the U.S. breezed by its competition in the group stage of the tourney by winning all six of their games by an average of 31 points. The star-studded roster, featuring WNBA players such as Tamika Catchings and Diana Taurasi, are the favorites to win the tourney.

Korea, on the other hand, is hobbling into the quarterfinals with a depleted lineup.

Its key players are missing and several others are coping with injuries. Key players like Choi Yoon-ah, Ha Eun-joo and Kim Jung-eun have been scratched due to injuries and others like Jung Sun-min and Park Jung-eun are also in bad shape. Lim will have eight to nine players available for the tough quarterfinals matchup.

“We achieved our goal,” said Lim in a post-game interview. “I want to thank my players for not giving up and trying their best under unfavorable circumstances. I’m proud of them.”

On Wednesday, Korea headed into their final group-stage game against rivals Japan facing a must-win situation. Coming off a 81-48 loss against Russia the previous night, Korea dropped its group stage record to 2-3. They also needed the Czech Republic to defeat Brazil in order to advance out of their group.

Korea had been in a tight game with the Russians, trailing by a single point at halftime, 29-28, but Lim opted to rest most of his starters for the game against Japan. Korea was out-scored 52-20 in the second half. The gamble paid off, as Korea pulled off a 65-64 nail-biter over its rival Japan. Leading the way for Korea was forward Jung. The captain scored 21 points, had six assists and added four steals in the game. The Czech Republic helped Korea’s cause by defeating Brazil 84-70.