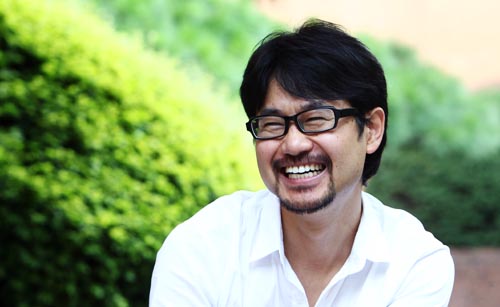 
Director Jang Cheol-soo’s first film “Bedevilled” had moviegoers on the edge of their seats with its graphic images of violence, but blood and gore were only part of the story. As one of the few Korean films to tackle the topic of domestic abuse, the film resonated with Korean audiences. It won praise at the Cannes Film Festival in May for its well crafted and suspense filled script.

Most recently, the film won the Audience Award at the Fantastic Fest on Wednesday and leading actress Seo Young-hee snapped up best actress honors. The U.S.-based festival specializes in horror, fantasy, sci-fi and action films.

Jang is known as the assistant director to renowned filmmaker Kim Ki-duk and he participated in the making of critically-acclaimed films such as “Samaria” (2004) and “Spring, Summer, Fall, Winter... and Spring” (2003).

But even with such high-profile support, Jang faced obstacles throughout the three-year production period.

The first challenge was casting. Jang sent the screenplay to some of Korea’s most high profile actresses including Kim Hye-soo and Jeon Do-yeon, but they all turned him down.

“Kim Ki-duk had first recommended Seo Young-hee for the part, and she was interested in doing it. But I hesitated,” Jang said. “Since this is a low-budget film, I thought the lead had to be someone with name recognition. 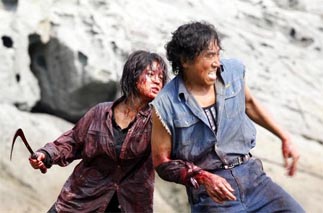 After years of domestic abuse, Bok-nam (Seo Young-hee) takes revenge on her husband Man-jong (Park Jeong-hak) in ‘Bedevilled.’ Provided by Peppermint and Company

“But when Seo told me how much compassion she had for her mother, who married into a family with seven sisters, I knew she was the perfect person for the part.”

In the film, Seo plays Bok-nam, one of two women who grow up on a remote island. Bok-nam’s friend eventually escapes to the city, leaving Bok-nam behind to endure the abuse of her in-laws and unsympathetic and downright nasty townspeople. The situation escalates when her friend returns to town and Bok-nam, unable to take it anymore, takes her revenge.

This was a highly personal film for Jang, who said he thought a great deal about his own mother during the production process.

“Korean mothers really had it hard back then,” Jang said. “I think the main character works as a medium through which to unleash some of the pain our mothers have suffered.”

Although things did not always go smoothly during the production process, fate intervened on occasion to provide some truly memorable moments.

The now notorious scene in which Bok-nam lays into her husband with a sickle as the wind blows their daughter’s picture up to her face, was caused by an actual natural gust of wind.

Moments such as those might only have been seen by a small audience had it not been for Charles Tesson, a former critic with the French film magazine Cahiers du Cinema and a member of the Cannes’ Critics Week committee. The critic saw Bedeviled during his stay in Korea. Shortly thereafter, the film was invited to be shown at the Cannes festival, where it was popular with audiences and critics alike. All four screenings were sold out and Jang fielded countless requests for interviews.

The film was a runaway hit in Korea, with the box-office returns far exceeding its 700 million won ($636,363) budget.

In the end, it was Jang’s belief in the project that made it a success.

“Even when things were difficult, I always believed that viewers would recognize a good piece when they saw one,” he said. “I’m pleased that I was right.”