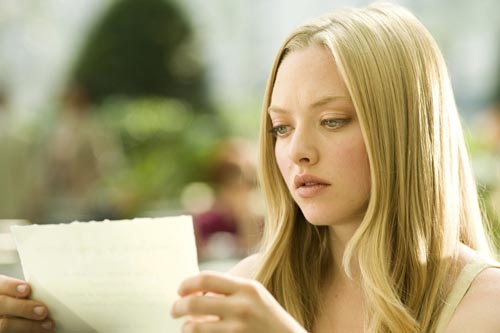 A scene from ‘Letters to Juliet’ Provided by Uni Korea


LOS ANGELES - Juliet might want to take her own life all over again if she knew the gooey depths to which Hollywood would sink in her name to woo an audience.

The doomed heroine of “Romeo and Juliet” is the nominal inspiration for “Letters to Juliet,” an unbearably predictable romance that would profane her name if it were not lifted a notch by the graceful, if inexplicable, presence of Vanessa Redgrave.

It’s a pre-honeymoon trip with fiance Victor (Gael Garcia Bernal), who is opening a restaurant and wants only to check out wineries, cheese makers and other culinary establishments to inspire his own business.

Left on her own, Sophie stumbles onto a group that writes replies to lovelorn women from around the world who leave letters seeking advice from the fictional Juliet on a wall at Verona’s Casa di Giulietta.

By a fluke, Sophie finds a half-century-old letter written by Claire, an Englishwoman who relates a tale of a broken love affair with the Italian man of her dreams.

Sophie fires off a passionate response that prompts Claire (Redgrave), now widowed, to return to Verona in search of her long-lost Lorenzo.

Along for the ride is her skeptical grandson Charlie (Christopher Egan), who takes an immediate dislike to Sophie and this whole endeavor, so you know what that means: Sophie joins Claire and Charlie on a wherefore-out-thou-Lorenzo quest that takes them all over Italy, the perfect setting for a Manhattan romantic to question her feelings for her absentee fiance and wonder if studly Charlie might be one of those snooty Brits with a secret heart of gold. You know, like Colin Firth.

You don’t need to write Juliet asking if Claire will find Lorenzo or who Sophie will marry.

Every turn of Letters to Juliet is obvious and expected, even insufferable.

Seyfried, who scored a hit this winter with the Nicholas Sparks love story “Dear John,” squeaks and whines her way along here.

She has little chemistry with the bland Egan and even less with the surprisingly dull Bernal.

The elegant Redgrave somehow floats above this mawkish mess and its sappy dialogue, even when she has to utter some of it herself. Next time, she should just write to “Dear Abby.”

Letters to Juliet, a Summit Entertainment release, is rated PG for brief rude behavior and sensual images, some language and incidental smoking.