Oh, the first freeze of the season

Oh, the first freeze of the season 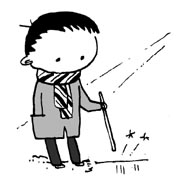 Kurt Vonnegut, an American science fiction writer known for his humanist beliefs, deals with a substance called ice IX in his 1963 novel “Cat’s Cradle.” It is an alternative structure made of ice. It freezes at 46 degrees Celsius and can turn the whole world into a huge snowball. Of course, this is just fiction.

But that doesn’t mean there is only one kind of ice. In 1900, Russian chemist Gustav Tammann discovered that a new form of ice was created when 3,500 atmospheric pressure was given to normal ice. The new ice, ice II and ice III, are much more dense.

Percy Bridgman of Harvard University, the Nobel laureate in Physics in 1946, also found ice with a different structure than normal ice. It is understood that his discovery, ice VI, remains a solid until the temperature goes up to at least 60 degrees Celsius. This creates hot ice.

Our understanding of ice has evolved to the point where we even have Ice IX. It is created when ice III is cooled rapidly. Fortunately, we need not worry about the whole world freezing because the real ice IX has a different freezing point than that described in Vonnegut’s novel.

In the old days, therefore, people hurriedly prepared for winter in anticipation for the arrival of the day. In “Nonggawolryeongga,” a song about farming seasons, there is a verse that depicts the workload of a farmer during this season: “Pick white radishes from the field and prepare the kimchi / repair the cracks in the ondol [floor heating system], and fill the holes in the wall / paste paper on your sliding door and plug the rat holes.”

It was reported that the first freeze of the season was observed at Daegwallyeong and Mount Seorak early on Tuesday morning - more than 10 days earlier compared to last year. That seems impossible to me because I still have my summer clothes and am waiting for the news of the arrival of the colorful autumn leaves.

But the changing of the seasons follows a natural process of decay and rebirth. We, too, must let things go in order to evolve.