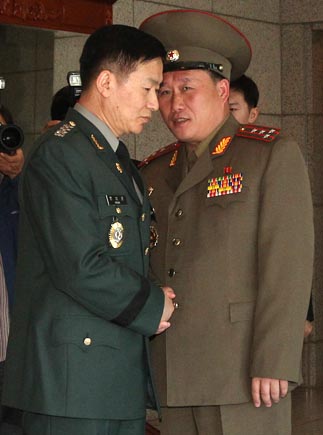 The first inter-Korean military talks in two years ended without progress yesterday as South Korea demanded an apology from North Korea for the deadly sinking of one of its warships, South Korean officials said.

At the working-level talks that lasted about two hours at the border truce village of Panmunjom, South Korean military officials “strongly urged North Korea to admit to, apologize for and punish those responsible for the attack on the Cheonan warship,” the South’s Ministry of National Defense said in a statement.

Also, the South demanded the North “immediately stop its military threats and aggressive behaviors at sea borders,” the statement said.

In response, North Korean officials reiterated that it cannot accept the results of a multinational investigation in May that pinpointed the North as the perpetrator in the ship sinking, according to the statement.

The two sides failed to set a date for the next round of talks, a ministry official said, adding that there was a brief exchange of a war of nerves.

“At the talks, both sides basically confirmed each other's stance on the sinking of the Cheonan,” the official said. “Our side emphasized there should be responsible measures from the North on the sinking and that was the key in resolving disputes.”

The North repeated its demand that the South allow North Korean inspectors to verify the multinational investigation's results.

Seoul made it clear that it has no intention of accepting such inspectors, saying the case should be handled under the framework of the U.S.-led United Nations Command because the attack was a violation of the armistice agreement that ended the 1950-53 Korean War.

Three officers from the two sides, led by Col. Moon Sang-gyun of the South and Col. Ri Son-gwon of the North, began talks Thursday at around 10 a.m., the first direct military contact between the countries since the sinking of the Cheonan.

“The future of inter-Korean relations would depend on how the South handles the two issues,” the North said, according to the South Korean statement.

Military tensions remain high after a multinational investigation led by South Korea concluded in May that North Korea was responsible for the attack on the Cheonan on March 26, killing 46 sailors. The North has denied the charges.

North Korea in recent weeks has made some peace overtures toward Seoul, freeing a seized South Korean fishing boat and offering to hold reunions of families separated between the two sides since the Korean War.

Seoul officials, however, are wary of what they say is North Korea's tactic of making such overtures after provocations to win concessions.

Thursday's talks came after North Korean leader Kim Jong-il appointed his youngest son, Kim Jong-un, to a four-star general this week and elevated the heir apparent to key posts in the North's ruling party, signaling a father-to-son power transfer in the communist nation.

Earlier in the day, South Korean Defense Minister Kim Tae-young said at a seminar in Seoul that North Korea is likely “to put its focus on building up a platform for power succession and resolving economic problems.”

“It seems that the Workers’ Party conference was aimed at promoting the guardian group for Kim Jong-un,” the defense minister said, apparently referring to the promotions of the North Korean leader’s sister and her husband.

The talks also came as South Korean and U.S. forces are holding five-day, antisubmarine drills that started Monday in the Yellow Sea in their second joint show of force against North Korea.