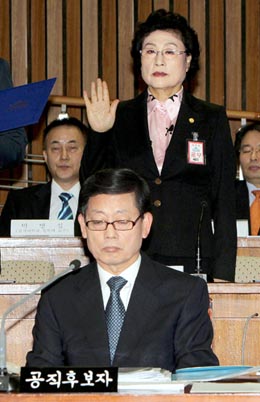 Opposition lawmakers stepped up their grilling of Prime Minister-designate Kim Hwang-sik to look into an influence-peddling allegation before wrapping up the confirmation hearing yesterday. A confirmation vote will take place today.

Kim has denied accusations that Dongshin University in Naju, South Jeolla, received special benefits, including lucrative state subsidies, because of the school's ties with Kim's family. Kim Pil-sik, Kim’s elder sister, is the president of the university.

The university has also denied the allegations. And Kim Pil-sik rejected the accusations yesterday during testimony at the confirmation hearing.

Despite the Dongshin allegations, the Grand National Party appeared confident yesterday that Kim Hwang-sik would be approved as prime minister. The party said the two-day confirmation hearing has actually cleared skepticism about Kim's qualifications.

Kim Hwang-sik, head of the Board of Audit and Inspection and a former Supreme Court justice, was also questioned at the hearing by lawmakers about the board's delay in auditing the government's four-rivers restoration project.

Eun Jin-su, a commissioner at the Board of Audit and Inspection, was also summoned to testify about the controversial development project.

While the Lee administration has pushed forward the signature program, opposition parties and environmental groups have opposed it.

Eun is in charge of auditing the project, and the Democrats have criticized him and Kim for being slow to conclude the review, allowing the government to proceed with construction in the meantime.

The special committee of the National Assembly in charge of the confirmation hearing was scheduled to approve a report about the hearing this morning.

The legislature is scheduled to hold a session this afternoon to vote on Kim’s nomination.

The Democrats, who led a campaign to disqualify President Lee Myung-bak’s first pick for prime minister, Kim Tae-ho, appeared to be in favor of the former Supreme Court justice as the new head of the cabinet.

DP lawmakers will meet today ahead of the vote to decide their position.

Meanwhile, the Blue House is expected to announce its foreign minister nominee today. Government sources have said Senior Secretary to the President for Foreign Affairs and National Security Kim Sung-hwan is likely to be the choice.

The announcement is expected to come immediately after the legislature's approval of Kim as the new prime minister.

Kim Sung-hwan, who served key posts at the Ministry of Foreign Affairs and Trade, including as head of the North America bureau and the second vice minister, has assisted Lee since June 2008 as the president’s senior foreign affairs secretary. He passed the foreign service exam in 1976 and worked at elite posts at the ministry until he joined the Blue House two years ago.

With his expertise, Kim is seen as the best candidate to prepare for the G-20 Summit in Seoul in November, as well as clearing up the aftermath of the nepotism scandal at the Foreign Ministry.

The foreign minister post has been left vacant since Yu Myung-hwan stepped down in light of his daughter's employment at the ministry.

A senior Grand National Party official told Yonhap News Agency yesterday that the ruling party will try to schedule a confirmation hearing for the foreign minister nominee on Monday because it is imperative to speed up the process to prepare for the G-20 Summit and the legislature's audit on the Foreign Ministry and Korean missions abroad. But it remains unclear if the Democrats will accept the schedule.