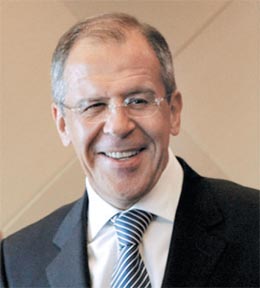 MOSCOW - Russia’s top foreign policy maker said the country’s investigation into the March sinking of the South Korean warship Cheonan is intended as internal information for the Kremlin and has never been shared with other nations.

In an interview with the JoongAng Ilbo and Russia’s Itar-Tass News Agency, Russian Foreign Minister Sergey Lavrov said Wednesday that the report was created to inform Russian leaders and not to be publicized.

“Russia’s conclusion has never been formally made public,” Lavrov said.

The Hankyoreh reported in July that Russia had concluded that the sinking was a sea mine accident, not a torpedo attack by North Korea, as Seoul maintains. The newspaper also said Russia’s report had been given to Beijing and Washington, but not Seoul.

The Cheonan sank on the night of March 26 in the Yellow Sea near the inter-Korean border, killing 46 seamen. A South Korea-led investigation, carried out by a team of South Korean, American, Australian, Canadian, British and Swedish experts, concluded in May that a North Korean torpedo, fired from a submarine, sank the corvette. The South’s military presented what they described as a North Korean torpedo retrieved from the site of the tragedy. North Korea denied that version of the events.

A group of Russian scientists visited South Korea from May 31 to June 7 to examine the evidence as a part of Russia’s own investigation, the results of which have never been released.

In the interview, Lavrov also said it is important to focus on the future to prevent military and political tensions on the Korean Peninsula from heightening further. He forecast that six-party talks on shutting North Korea’s nuclear weapons program will soon resume.

Lavrov also expressed concern that the two Koreas are politicizing the UN Security Council resolution on the Cheonan’s sinking.

Lavrov said South Korea and Russia’s relationship is growing stronger, noting that the two countries celebrate the 20th anniversary of the start of diplomatic relations this year. Lavrov stressed that Russia is highly interested in South Korea’s experience of fast modernization and continued development. “We are ready to cooperate in Korea’s green growth and energy conservation policies,” he said. Lavrov also said the focus of the two countries’ trade must be transformed to see stable and sustainable growth.