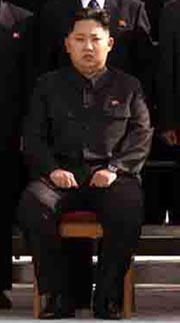 The world got its first glimpse yesterday of an adult Kim Jong-un, son of North Korean leader Kim Jong-il and his heir apparent.

Following a one-day meeting of the Workers’ Party, at which the son received government posts that suggest he is in line to succeed his father, the official newspaper of the party’s Central Committee published a group photo of government officials with Jong-un seated in the front row, two seats away from his father.

That image and two additional photos, each with varying numbers of officials, were released by the official Korean Central News Agency hours later. Jong-un was in the front row of all three, but it took Western photo agencies’ blowups to actually see what he looks like.

Dressed in a Mao suit and sporting swept-back hair, Jong-un was expressionless, surprisingly portly and jowly for a man in his late 20s.

Previously, the only images available of him were from his school days in Switzerland. 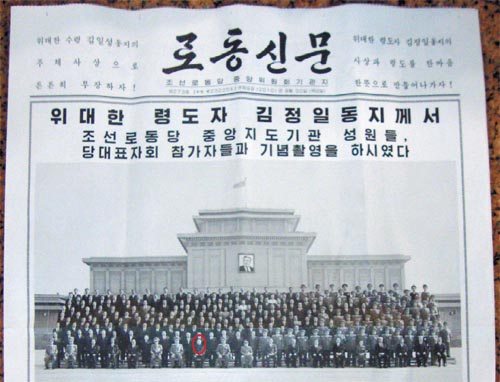 Yesterday’s front page of the Rodong Sinmun with a group photo of North Korean officials, including Kim Jong-il and son, Jong-un, in the front row. The photo was taken at the Kumsusan Memorial Palace in Pyongyang. [AP]

According to analysts, Jong-un’s younger sister, Kim Yeo-jong, 23, is also in one photograph, standing next to Kim Ok, who is frequently referred to as Kim Jong-il’s “first lady.” The sister has never been seen in public before, and her photographs have never been released. She and Jong-un shared the same mother, Ko Young-hee, who died in 2004.

KCNA reported yesterday that Kim Jong-il had participated in a photo session with newly elected members of the Workers’ Party leadership. Kim Jong-un was mentioned in the article, but North Korea did not provide captions for the pictures identifying the appointees. Analysts pinpointed Jong-un and said he resembled both his father and grandfather Kim Il Sung, North Korea’s founder. 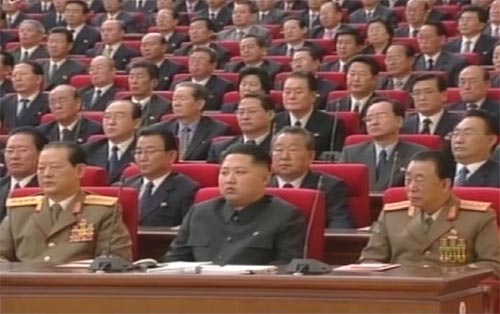 
The rare Workers’ Party conclave convened on Tuesday after an unexplained delay, and Jong-un received high posts within the party after receiving a four-star general position earlier that day.