For some, lizards are man’s best friend

For some, lizards are man’s best friend 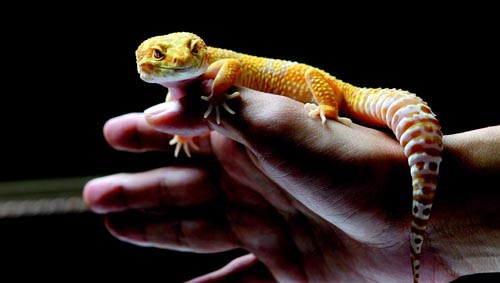 A leopard gecko has 10 fingers and double eyelids. Photo by Kim Sang-seon


For Choi Jin-won, lizards are more than just pets.

“Ever since I saw little lizards squirming on the sand through a shop’s glass window, I was hooked,” said the 26-year-old Choi, who has been raising lizards for eight years.

Choi is often consulted by his fellow netizens on an Internet cafe called “Bearded Dragon,” where they congregate to share information and advice.

He is not shy about his love for lizards; he raises 13 of the reptiles - four different species - including a bearded dragon and leopard gecko.

Including baby lizards, the total number of lizards in his house exceeds 30. One of the three bedrooms in his apartment is even for lizards only.

Raising lizards as pets has become a big thing in Korea, with imports of these friendly reptiles surging in the last decade or so.

According to the Korea Customs Service, 2,754 lizards were imported just in the first half of this year, which is double the number from last year.

Bae Sung-chan, director of Raptailia, a store that specializes in rare animals, said his customers are wide-ranging. 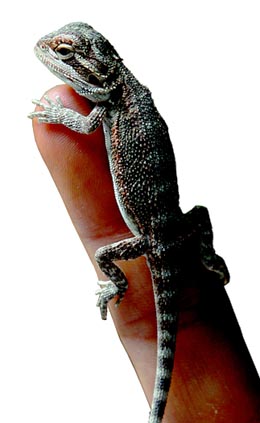 For Choi, lizards helped him get through university life when he was lonely.

“Because of the lizards, I was able to survive lonely days, being away from the family to attend university in the suburbs,” said Choi, adding that “it is possible to cohabit with lizards.”

Bearded dragons, as the name suggests, are lizards with sharp prickles that look like a beard. The omnivores grow 1 to 2 centimeters (0.4 to 0.8 inches) per month. When young, bearded dragon lizards eat insects such as crickets, but as they grow older, they like to eat vegetables. They do not bite people and an adult bearded dragon grows to be about 50 centimeters long.

Choi also owns a night-time loving leopard gecko, which are not easy to look after.

The nocturnal animals are very sensitive to temperature and light. If you fail to keep the temperature to 29 to 33 degrees Celsius (84.2 to 91.4 degrees Fahrenheit), they refuse to eat. In addition, these spot-skinned creatures do not enjoy eating prey that does not move.

In order to keep things dark during the day, Choi covers the area where his leopard geckos live. Choi’s leopard gecko has a plump tail, which means it is very healthy. Since leopard geckos store nutrition in their tails, the thicker it is, the healthier they are.

Choi says he obtained information on how to raise lizards from foreign Web sites and professional trainers.